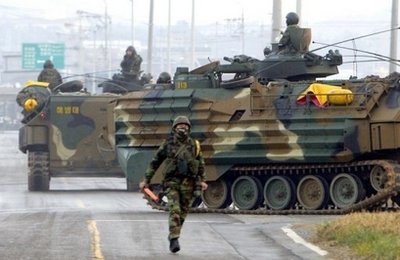 North Korea said Monday it would no longer deal with South Korea and threatened to retaliate against any moves by Seoul to wage "psychological warfare".

The North's powerful National Defense Commission (NDC) said in a statement it would also cut a military communications line on the east coast and shut a liaison office at the jointly-run Mount Kumgang resort.

The statement came just days after leader Kim Jong-Il, who chairs the NDC, returned from a visit to his country's key ally China. Kim was quoted by Beijing's media as saying he wants to improve cross-border relations.

"The army and people of the DPRK (North Korea) will never deal with traitor Lee Myung-Bak and his clan," said the statement on the official KCNA news agency on Monday, referring to the conservative South Korean president.

It castigated recent statements by Lee's government, accusing it of "driving the inter-Korean relations to uncontrollable catastrophe".

The NDC also reiterated threats of "physical action without any notice" to halt psychological warfare.

The North has repeatedly threatened to open fire at sites used by South Korean activists to launch leaflets criticizing Kim's regime across the heavily fortified border.

It has also been pressing its neighbor to resume lucrative cross-border tourist trips to the east coast resort of Mount Kumgang.

The South suspended visits by its nationals after a North Korean soldier shot dead a Seoul housewife there in July 2008.

Cross-border relations have been icy for over a year, since the South accused the North of sinking one of its warships and imposed trade sanctions.

The North denies involvement in the sinking which cost 46 lives. But last November it shelled a South Korean border island, killing four people including civilians.

Seoul says its neighbor should accept responsibility for both incidents before any serious dialogue can resume.

China and other parties say the North should discuss its nuclear program with the South as a prelude to full six-party talks.

"It has little room to maneuver against South Korea in protest at Seoul's consistent policy of no engagement.

"It (the statement) is also seen as a warning that cross-border tensions could escalate, especially along the eastern section of the border, unless South Korea changes its policy."

Yang told AFP he does not expect any immediate and dramatic escalation of tensions.

"But the statement is worrisome as it comes amid a flurry of diplomacy to resume six-party talks by U.S. and China," he said.

"The statement followed Kim Jong-Il's trip to China. It indicates that Kim might have secured China's pledge to provide economic assistance and guarantee the security of his regime."