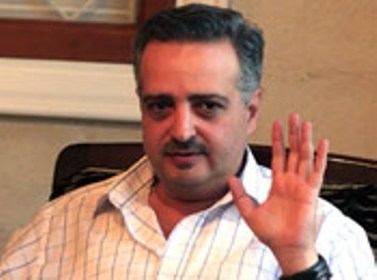 “Despite the differences among the Lebanese, Berri is an important national guarantee that all sides should gather around to overcome the delicate stage with minimum losses,” Arslan said after holding talks with Berri in Ain el-Tineh.

Asked about the so-called Orthodox Gathering draft-law, which was approved by the joint parliamentary committees on Tuesday, the official refused to comment on the matter.

“There are several electoral proposals and Berri is seeking to bridge the gap between the foes to reach consensus over the electoral law,” Arslan told reporters.

The polls are likely to be postponed if the parliament gives the green light to the Orthodox Gathering proposal.

It divides Lebanon into a single district and allows each sect to vote for its own MPs under a proportional representation system.

But the proposal has been rejected by al-Mustaqbal bloc, the centrist National Struggle Front of MP Walid Jumblat, and March 14 opposition’s Christian independent MPs. It has been also criticized by President Michel Suleiman and Prime Minister Najib Miqati.

The meeting, according to the state-run National News Agency, was held in presence of Arslan's state minister Marwan Khaireddine and tackled the latest developments.

Alliances can be done and undone. Let's not forget that almost all factions fought each other during the civil war. This law is bad for every Lebanese because what is good for one sect is not good for Lebanon. In order to be good for Lebanon it has to directly benefit to ALL Lebanese sects.

That's my point of view. Good weekend to everyone.

“Berri is an important national guarantee that all sides should gather around to overcome the delicate stage with minimum losses” and "[he] is seeking to bridge the gap between the foes to reach consensus over the electoral law. Right. Yet another attempt to sell the BS that is "Consensual Democracy". Who ever heard of such crap?
Berri is the (s)elected Speaker of the House and (s)elected MP, isn't he supposed to uphold the very essence of Democracy and not just his own interests? Isn't it odd that no one ever brings out the fact he is the embodiment of MPD, especially so close to elections?
These are not elections, they are nominations and extensions. But guess what? we deserve it because we have NO GUTS!

This guy will benefit from the electoral law! :/