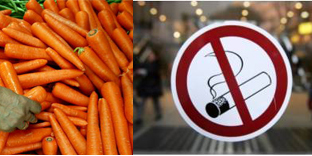 New Zealand prisoners are reportedly being offered carrot sticks to help them overcome nicotine cravings as jails prepare to go smoke-free next month.

A leaked internal memo from Invercargill Prison said prisoners were being supplied with two carrot sticks a day in an effort to make them quit smoking before the total ban comes into force on July 1, the Southland Times reported.

The memo said one jumbo-sized carrot could yield 16 carrot sticks if cut into uniform size "to the best of our ability", the newspaper reported on Tuesday.

Corrections Association of New Zealand president Beven Hanlon said when he first heard about the scheme he thought it was a joke.

"I don't think it is one of the best ideas but it is worth a try," he told the newspaper.

Hanlon, whose union represents prison wardens, said the carrot sticks were intended to take prisoners' minds off smoking and they were a healthier alternative to other options, such as hard-boiled sweets.

"It's the whole oral thing... if they have got something in their mouth, they won't be looking for a cigarette to put in it," he said.