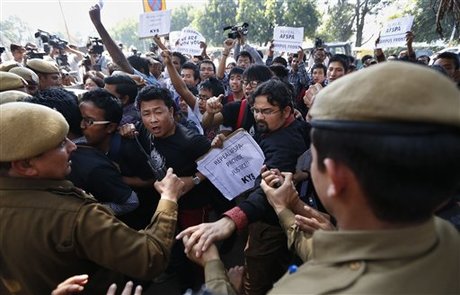 Two women have been kidnapped and gang-raped near Delhi, police told Agence France Presse on Thursday, in two separate incidents that highlighted the persistent risk of sexual assault in India.

"The driver drove the rickshaw to a remote forested area where he and the two other men repeatedly raped her before fleeing the area," Nitin Tiwari, Ghaziabad's senior superintendent of police, told AFP.

The teenager then made her way to a local police station where she filed a case against her attackers, two of whom confessed to their crimes earlier this week, Tiwari said.

Police are still in pursuit of the third man, he added.

The second incident involved a 25-year-old woman who met one of her alleged attackers in a park in east Delhi on Wednesday to discuss a possible job opportunity, Delhi police press officer Satbir Singh told AFP.

"She said the man offered her a soft drink, which she drank before passing out due to some illicit substance in the drink. When she woke up, she found herself trapped in a car with a few other men inside," Singh said.

"The men raped her before dumping her near a dustbin, where police found her lying unconscious at two in the morning," he said.

Police have registered a case and are hunting for the alleged attackers, he added.

Police also said a three-year-old child who was allegedly kidnapped and gang-raped had been admitted to a hospital in the southern state of Kerala, local media reported Thursday.

The toddler went missing on Tuesday morning, before a group of school students found her lying unconscious outside and called the police, according to NDTV news channel.

The child sustained several injuries and has already been through two surgeries at a hospital in Kozhikode city, where she is currently under observation.

The crimes provide grist for a growing debate in India over the status of women and girls and their safety in the country.

Rape incidents in Delhi alone have doubled this year, India's minister of state for home affairs Mullappally Ramachandran told the upper house of parliament on Wednesday.

The Indian capital has seen around four rape cases a day since January 1, compared to an average of two rape cases registered daily in 2012, though the increase could be attributed, in part, to more reporting by emboldened women.

Thousands took to the streets to protest against India's treatment of women following the fatal gang-rape of a 23-year-old student on a moving bus in Delhi in December.