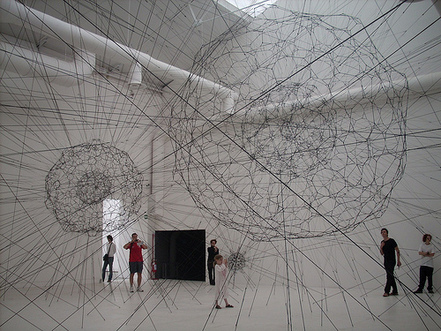 The City of Water has been transformed into a City of Light for the prestigious Venice Biennale contemporary art festival starting Saturday, where 83 artists and 89 countries are represented.

Venice's historic Arsenal, a medieval shipyard complex in the heart of the historic city, hosts an exhibition entitled "ILLUMInations" while the national pavilions are spread around a park on the shores of the Venice lagoon.

"There are references to light in many of the works," Bice Curiger, visual arts director for the Biennale, said at a news conference in the city.

The festival has more than a touch of the spirit of Venetian Renaissance artist Tintoretto -- whom Curiger described as "a painter of light".

At an installation by Britain's James Turrell, visitors enter an immaculate white cube where they find themselves shrouded in a sort of fog tinted in blue, purple and pink -- a disconcerting sensorial experience.

There is reflected light in the installation "15 steps towards the Virgin" by Monica Bonvicini in which visitors' silhouettes undulate on mirror-covered steps lit up by neon, one of which has been riddled with bullets.

The Italian said Tintoretto's Presentation of the Virgin had inspired her.

Far from rejecting classical art, artists taking part in the Biennale appear to want to re-appropriate it by re-interpreting it.

One example is an installation by Britain's Ryan Gander featuring two reproductions of a Degas painting.

And one of the most eye-catching works is by Switzerland's Urs Fischer -- three marble-like statues made of wax that will be set on fire during the festival.

The statue of a businessman dressed for the weekend is already burning away, with its flickering flame currently making its way through the head.

Another unusual work is by Britain's Gerard Byrne -- a reflection about Loch Ness and its famous monster through a video and a series of black-and-white photos depicting trunks of dead trees and disturbing shadows.

One of the highlights is U.S. photographer Cindy Sherman, who has put together a series of collages in which she dresses up as different historical figures -- including Joan of Arc -- all set against bucolic backdrops.

Chinese artist Song Dong plunges the visitor into a labyrinth made up of 100 wardrobe doors from his grandmother's attic, which is overlooked by the entry way of his family's ancestral home.

Countries taking part for the first time include Bahrain and Saudi Arabia.