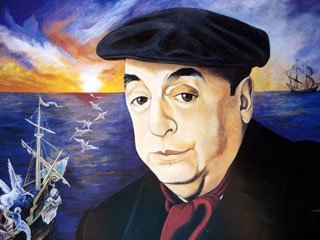 Chile will launch an investigation into the death of Nobel Prize-winning writer Pablo Neruda, who died 12 days after the 1973 coup that overthrew the government, officials said Thursday.

It had long been believed that Neruda, among Latin America's most renowned literary figures and an active Communist Party member, had died of cancer, but officials said they now will try to determine whether Neruda was the victim of homicide.

The move Thursday was ordered by a judge after the poet's longtime associate Manuel Araya -- who worked as his secretary, personal assistant and driver -- came forward to say Neruda was assassinated by the regime of General Augusto Pinochet.

The investigation into Neruda's death follows last month's decision by the Chilean government to exhume the remains of former president Salvador Allende, hoping to finally determine whether he committed suicide or was murdered during the coup led by Pinochet.

The same judge is also examining the circumstances of Allende's death.

Araya, who was at the poet's bedside until a few hours before his death at the age of 69, caused a media stir last month with the claims he had been hospitalized at the Santa Maria Clinic in Santiago "not because of worsening health, but for his security."

Neruda, he said, was "anxious and tense," and that he believed the new regime was bent on eliminating him, and was alarmed by an injection administered by a doctor a night before he had planned to fly to Mexico.

Araya said Pinochet feared Neruda would go into exile as a high-profile dissident.

"Pinochet was a murderer. He killed Neruda so he wouldn't leave the country, because he was an intellectual that (Pinochet) did not want to have as an opponent," Araya, 65, told Agence France Presse last month.

The Foundation, which owns the rights to the poet's work and is charged with maintaining his legacy, has said there is "no indication and no proof whatsoever that suggests that Pablo Neruda died of causes other than the cancer, at an advanced stage, that he had suffered from."

"It does not seem reasonable to construct a new version of his death solely based on the opinion of his driver," the group said last month.

Neruda, who won the Nobel Prize for Literature in 1971, is best-known for his love poems as well as his "Canto General" -- an epic poem about South America's history and its people.

He was a senior member of Chile's Communist Party whose writings were work banned during Pinochet's 1973-1990 military dictatorship.

Neruda's real name was Neftali Ricardo Reyes Basoalto, and he took the pen name of Pablo Neruda in memory of the Czech poet Jan Neruda.

He joined the Republican movement during the Spanish Civil War and began working on poems in the 1930s while living in Spain and France. He was elected to the Chilean Senate in 1945 and also held several diplomatic posts.

In January, Chilean authorities agreed to review 725 cases involving possible crimes against humanity under the dictatorship involving an estimated 3,100 people who died or disappeared.

To date, some 700 former military or police officials have been prosecuted for crimes under the Pinochet regime, but just 70 have been imprisoned.