Tropical 'Hotspots' May Get Too Warm to Farm 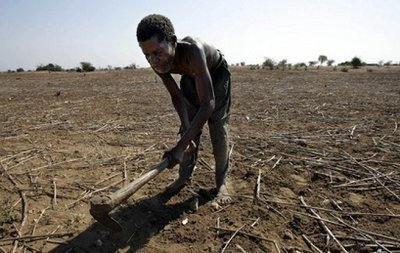 Tropical 'Hotspots' May Get Too Warm to Climate change is on track to disrupt lifeline food crops across large swathes of Africa and Asia already mired in chronic poverty, according to an international study released Friday.

More than 350 million people face a "perfect storm" of conditions for potential food disaster, warns the report by scientists in the Consultative Group on International Agricultural Research (CGIAR).

If these areas have a history of persistent food shortages to begin with, the mix could be lethal.

"We are starting to see much more clearly where the effect of climate change on agriculture could intensify hunger and poverty," said Patti Kristjanson, a scientist at CGIAR's Research Program on Climate Change, Agriculture and Food Security (CCAFCS).

Farmers know from experience how to cope with fickle weather patterns by changing planting schedules and moving livestock.

But rapid and major climate shifts may force them to use "entirely new crops or new farming systems," and many may not be able to adapt, Kristjanson said.

One identifies areas likely to heat up beyond optimal conditions -- or even outright tolerance -- for major crops, including rice, maize (corn) and beans.

Average maximum temperatures during growing seasons, for example, are poised to rise above 30 degrees Celsius (86 degrees Fahrenheit) across parts of west and southern Africa, India and China by 2050.

In some agricultural zones growing seasons may be shortened by at least five percent, and in others year-on-year variation in rain will likely to exceed 21 percent, both considered viability thresholds for certain crops, the study found.

"When you put these maps together, they reveal places around the world where the arrival of stressful growing conditions could be especially disastrous," said Polly Ericksen, a scientist at CGIAR's International Livestock Research Institute in Nairobi.

Even in rich nations, climate-related impacts can be highly disruptive -- French livestock farmers, reeling from the most severe spring drought in more than a century, are culling herds for lack of feed.

But in much of Africa and Asia, where farmers are already struggling to meet basic needs, "survival is strongly linked to the fate of regional crop and livestock yields," Ericksen said.

Scientists are working furiously to breed new strains of staple grains that will be able to resist future warming, but some regions may have to shift to new crops altogether to meet nutrition needs, the researchers said.

"The window of opportunity to develop innovative solutions that can effectively overcome these challenges is limited," said Philip Thornton, a scientist at CCAFS and co-author of the study.

"Major adaptation efforts are needed now if we are to avoid serious food security and livelihood problems later."