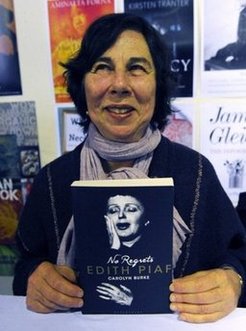 A new book about legendary French singer Edith Piaf reveals much about her life before stardom, including her yearnings for poetry and philosophy as a young girl working to overcome her tough upbringing.

Writer Carolyn Burke said her biography "No Regrets -- The Life of Edith Piaf" delves deeply into the early life of the "Little Sparrow", and invites a reassessment of one of the most famous singers of the 20th century.

"We get the young Piaf that we didn't necessarily know about even if we heard her sing," Australian-born Burke told Agence France Presse at the Sydney Writers' Festival this month.

Burke's book is among the first to draw on more than 100 letters written by a young Piaf to one of her mentors, the scholarly Jacques Bourgeat, held in the Bibliotheque Nationale de France and only recently released to scrutiny.

"Those letters reveal aspects of Edith Piaf that we couldn't have known about," Burke explained.

"You see her desire for an education, to better herself. We learn about her emotional and spiritual development even, because she had a strong wish... to not only study poetry but philosophy."

Burke said the letters reveal a tenderness between Piaf and the middle-aged, poetry-writing Bourgeat who instructed the young woman with scant education after a hand-to-mouth existence on what to read and how to improve her French.

"I was sitting there reading Edith Piaf's handwriting, seeing her mistakes in spelling and grammar and she says things to him like, 'I'm making progress aren't I? Is this a better letter?' He's trying to help her learn proper French. It's so important to know that."

The unlikely pair, who were not lovers, corresponded for the next 25 years and Burke believes the letters provide "the very best source for a deeper look at who she was and how she developed."

Piaf began writing lyrics shortly after meeting Bourgeat at a Paris nightclub, and Burke believes it was in part with his help that she acquired enough confidence and experience with the language to become a lyricist.

"As a woman who had no education, no background, nothing ... her family wasn't even working class, they were the lowest of the low... how she managed to do what she did with such generosity to others... it's fascinating to me."

Almost 50 years after her death, aged 47, Piaf remains a formidable cultural influence -- inspiring singers as diverse as Martha Wainwright and Lady Gaga -- and has a devoted fan following around the world.

Burke's research led her to some of these fans, the collectors of Piaf items such as one of her signature black dresses, old recorded versions of her songs and home movies taken by members of her entourage.

She understands their passion, having been struck by the beauty of the language and power of Piaf's voice when she first heard her sing on the radio as a student in Paris.

The result is a biography which has been criticized as too kind to Piaf -- known for her many lovers, her associations with the gangster class, and her reliance on painkillers in later years.

Burke said her book was no "whitewash" but it was time for a kinder judgment on the woman who held listeners spellbound with the haunting voice she carried within her diminutive frame.

"The problem is people have lots of stereotypes in their minds about who entertainers are and in particular Piaf. People think, 'Oh, we know who that was -- poor self-destructive waif'," she said.

"And my book goes completely in another direction which shows how creative she was and how much she shaped her own repertoire and legend. So I am offering a different look at her life."

At times her life reads as invention -- her father was a travelling contortionist, her mother a singer who left her as a toddler and became a drug addict, and her early childhood included time living in her father's family's brothel.

Burke said that much written about Piaf is exaggerated or even malicious.

"For instance the business with the drugs, those were all prescription drugs that she took to manage her horrible chronic pain," she said.

"The pain that resulted from several car accidents. What she took was prescribed by doctors so that she could go on singing."

Burke wants to remind the world, and France, that Piaf was an entertainer who displayed enormous creativity, courage and resilience despite her difficulties and personal sorrows.

"I mention that she was tyrannical and that she made her entourage do things exactly the way she wanted. They had to eat the same meal every night for a week if that's what she wanted. And they had to get up at 4.00 am if she rang.

"But it's true that I wanted to take a different perspective to show her rather admirable traits I think because they have been underplayed.

"There may be time for a new look at Piaf in France. And wouldn't that be good if an Australian could do it?"