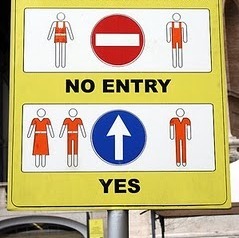 Foreign tourists have been banned from visiting a prominent Hindu temple in India's Goa state after outrage at their inappropriate clothing and behavior, religious leaders said.

Officials at the Mahalasa Narayani temple in Mardol, 20 kilometers (12 miles) from the state capital Panaji, said they had taken the decision because of complaints from worshippers about scantily-clad women sightseers.

Two other historic temples -- in Mangueshi village and Ramnathi in Ponda -- have separately introduced a strict dress code.

"We are not against the foreigners but their dresses and conduct in the temple is highly objectionable because of which temple management has decided to ban them," said Mahalasa Narayani president Vinod Kamat.

Some visitors to the centuries-old place of worship were wearing garlands of flowers and then "dumping" them before the deity, he added.

In Hinduism, the practice is normally to carry the garland then place it before the god or give it to the priest.

"There has to be some discipline in the temple," said Kamat.

Some 400,000 foreigners travel to Goa every year to enjoy its beaches and laid-back atmosphere that is in stark contrast to other parts of socially conservative India.

In 2010, state tourism bosses decided to ban the use of bikini-clad women to promote the destination, fearing that it sent out the wrong message.

But in April this year it changed its mind, hiring three models to wear the skimpy swimwear to feature in advertisements targeting the overseas market.

Very good information. Most of the Goa temple are closed for foreigners because of their dress. This temples never allow such dresses wear by foreigners. This is the best decision and I will definitely appreciate this decision.