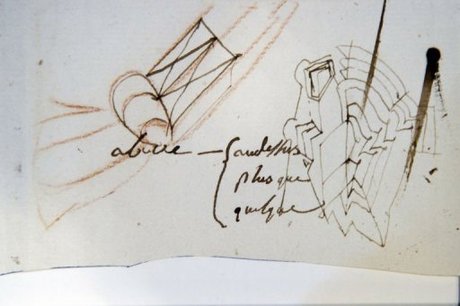 Napoleon's first English lessons while he was banished to exile on the South Atlantic island of Saint Helena fetched more than 93,000 Euros at an auction in France Sunday, several times more than they had been valued.

Three lots of text in English and French, as well as drawings, by the fallen emperor had been valued 7,000 to 9,500 Euros, said the Osenat auction house.

"Qu’es qui étoit arrivé. What was it arrived," Napoleon wrote in his first stumbling efforts to grasp the language of his adversaries.

In other exercises he wrote: "Combien etoint-ils. How many were they" and "Comment se portoient-ils. How do they do".

The private Museum of Letters and Manuscripts in Paris paid 93,125 Euros for the lots, which it said it would put on display from June 21.

The same museum paid 53,750 Euros for manuscripts that Napoleon edited at Saint Helena for his memoirs, including his account of his victorious Battle of the Bridge of Arcole in 1796.

It also bought a list of assembly member votes during the French Revolution on the sentence for Louis XVI, who was eventually sent to the guillotine in 1793.

The manuscript of about 20 pages is one of several copies, with the original held in the Archives of France. It nonetheless fetched 35,000 Euros after being estimated at between 2,000 and 3,000 Euros.

Perhaps the biggest surprise of the auction was that 187,500 Euros was handed over for a document concerning the end of the French expedition in Egypt. It had been valued at between 6,000 and 8,000 Euros.

The 29-line missive by Egyptian general Ya'qub Hanna to Napoleon is written in gold and black ink.

After his defeat to the British at the 1815 Battle of Waterloo, Napoleon was imprisoned and then exiled to Saint Helena where he died in 1821 age 51.