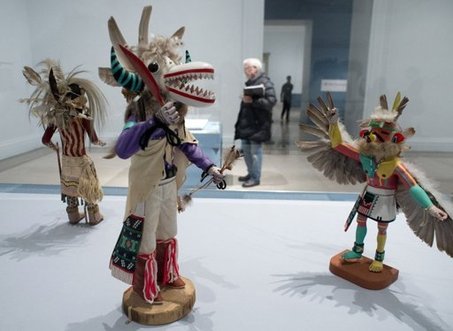 Two museums in the southwestern U.S. state of Arizona have joined an effort by Hopi cultural officials to halt the sale of sacred Hopi kachina artifacts at a Paris auction house next week.

In messages on social media, the Heard Museum and the Museum of Northern Arizona said the scheduled April 12 sale by Neret-Minet Tessier and Sarrou has triggered outrage within the indigenous Hopi community.

On its website, the French auctioneers say it will be putting 70 kachina visages -- mask-like representations of spirit characters used in Hopi ceremonies -- on the block.

Robert Bruenig, director of the Museum of Northern Arizona, appealed for the objects' return to Arizona, in an open letter to the auctioneers posted on the Flagstaff institution's Facebook page.

"The proposed sale of these katsina friends, and the international exposure of them, is causing outrage, sadness and stress among members of the affected tribes," he said, using an alternative spelling for kachina.

"For them, katsina friends are living beings. ... To be displayed disembodied in your catalog, and on the Internet, is sacrilegious and offensive," he said.

The Heard Museum in Phoenix, in a statement it posted on Facebook, said the "sale of items of significant religious and cultural importance to the Hopi tribe" was a matter of "extreme concern" for its American Indian staff.

Last month the director of the Hopi Cultural Preservation Office, Leigh Kuwanwisiwma, urged Neret-Minet to cancel the auction and "begin respectful discussions to return them back to the tribe."

Kachina spirit figures are fundamental to the faith and heritage of the more than 18,000 members of the federally recognized Hopi tribe who mainly live in northeastern Arizona.

The Arizona Republic newspaper said it was unclear when or how the items were acquired, but it noted that in past U.S. cases, some artifacts have been secretly sold to collectors by tribe members for a profit.