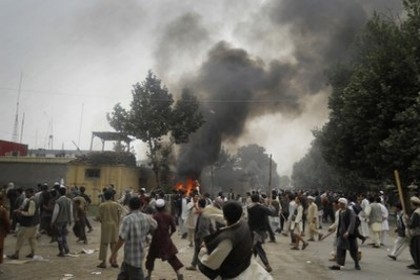 Taliban insurgents in Afghanistan have killed seven civilians with a roadside bomb and cut the throats of four Afghan soldiers kidnapped while traveling home on leave, officials said Wednesday.

The civilians were traveling to the town of Shindand in the western province of Herat when their van was torn apart by the blast on Wednesday, they said.

Seven civilians, including children, were killed and four wounded, the interior ministry said in a statement blaming the Taliban.

"It was the work of enemies of Afghanistan, the terrorists," Noori told Agence France Presse, referring to the Taliban who have been battling Afghan government and foreign forces since 2001.

It was the second fatal incident of its type in two days. On Monday a roadside bomb hit a tractor in the south, killing seven civilians and wounding four.

Roadside bombings and other explosions are a key weapon used by Taliban and other insurgents against Afghan troops and members of the U.S.-led foreign force. But civilians are often casualties of the blasts.

The bodies of four Afghan soldiers were found Wednesday with their throats cut in Jawzjan, a day after they were kidnapped by the Taliban along the road to the northern province, police and officials said.

They were traveling home for a vacation, according to a local police spokesman. Sayra Shekib, chief of Khwaja Dokoh district, where the soldiers were found, confirmed the incident and blamed the Taliban.

Afghan troops and police are increasingly taking the front-line role against insurgents as foreign combat forces prepare to withdraw by the end of next year.

The interior ministry said separately that 38 insurgents have been killed since Tuesday during sweeps in 10 provinces by Afghan and coalition forces.

In the capital Kabul on Wednesday, a bomb planted in a rubbish bin near parliament caused panic among citizens but police said there were no casualties.