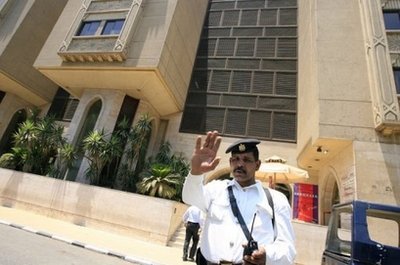 Egyptian authorities have arrested an alleged Israeli officer working for the Mossad intelligence agency on charges of spying, the official MENA news agency reported on Sunday.

The Supreme State Security prosecutor ordered the man's detention for 15 days pending investigations into alleged "spying on Egypt with the aim of damaging its economic and political interests," MENA said.

Egyptian state television said the "Mossad officer," an Israeli national, had arrived in Egypt shortly after the start of the January 25 uprising that toppled president Hosni Mubarak, seeking to "incite chaos and sectarian strife."

Egypt's intelligence services had suspected the man "who was posing as a foreign correspondent" covering anti-regime protests in Cairo's Tahrir Square of spying and monitored his movements and phone calls before his arrest, MENA said.

Israel's foreign ministry said it was unaware of any reports of Israeli citizens being detained in Egypt.

Israeli commentators said reports that an Israeli citizen had been arrested for spying for the Mossad in Cairo seemed strange.

"I can't imagine that there will be any Israeli reactions, but anyone who knows even a little bit about these things knows that you don't have an Israeli with an Israeli passport sitting in a foreign capital collecting things," said Channel 2 news analyst Ehud Yaari.

Last year, Egypt -- which signed a 1979 peace treaty with Israel -- said the confessions of an Egyptian accused of spying for Israel had led to three espionage cells being dismantled in Lebanon and Syria.

It would be interesting to see, as this case unfolds, if any real solid evidence is put into the public domain. Accusations come cheap and confessions are all too easily extracted.