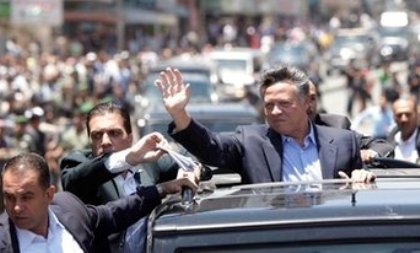 Jordanian MPs on Tuesday denied the king's motorcade was attacked with stones during a visit to a southern city, saying residents were jostling as they tried to greet the monarch.

"All what happened was that people and security forces were jostling as youths tried to see his majesty (King Abdullah II) and shake hands with him," MP Yehia Saud of Tafileh, 180 kilometers south of Amman, told Agence France Presse.

"I was there and I saw everything. Nothing happened during the visit."

"The king's motorcade drove through Tafileh for at least 10 kilometers and people stood on both sides of the road to greet him," he said.

A security official told AFP on Monday that "(the rear) part of King Abdullah's motorcade was attacked with stones and empty bottles by a group of men in their 20s and 30s after the king's car entered Tafileh."

He added that no one was hurt.

Both the palace and government have denied the official's comments.

"It is absolutely groundless. Footage taken during the visit to Tafileh proves that," a court official told AFP.

And government spokesman Taher Adwan said "the motorcade of his majesty the king was not attacked," telling the state-run Petra news agency that the "visit to Tafileh was successful."

"All that happened was a quarrel between police and people who wanted to greet the king," who ordered several multi-million-dollar development projects in the city, Adwan said.

Other MPs and senators issued a statement on Tuesday insisting that the king's motorcade "was never attacked."

"It was simply a friction between police and youths who wanted to greet his majesty the king," it said.

A group from Tafileh plan to demonstrate on Tuesday outside the office of AFP in Amman to protest the report, a police officer said. Other international media have published similar stories about the incident.

Since January, Jordan has been facing a protest movement demanding political and economic reforms and an end to corruption.