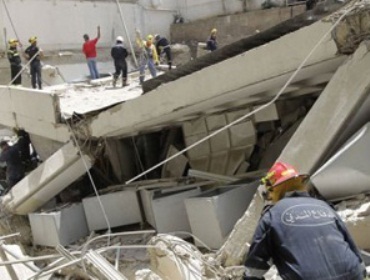 Around 100 people are feared trapped after a four-story building under construction collapsed in northeastern Rwanda, the government said Tuesday.

"So far, the tentative information we have indicates that debris fell on about 100 people, we are yet to come up with the exact figures," Rwandan Minister of Disaster Management Seraphine Mukantabana told Agence France Presse.

Police spokesman Theos Badege said that three people were confirmed dead and 21 people had been taken to hospital.

Those trapped are believed to include both construction workers on the building as well as passersby on the street.

"Working with the Rwanda Defense Forces, the police have secured the site and are currently undertaking an intensive rescue operation," the police said in a statement.

The building, on a roadside in the town of Nyagatare, some 100 kilometers (60 miles) northeast of the capital Kigali, collapsed on Tuesday afternoon at around 3:00 pm (1300GMT), police said.

"At the moment we are working with the police on a quick response," Mukantabana added.

"The building that collapsed was a four-story located in Nyagatare district by the roadside, and that is why it affected many people."

Rwanda's Ministry of Disaster Management said in a statement it had "deployed equipment to assist with the rescue operation."