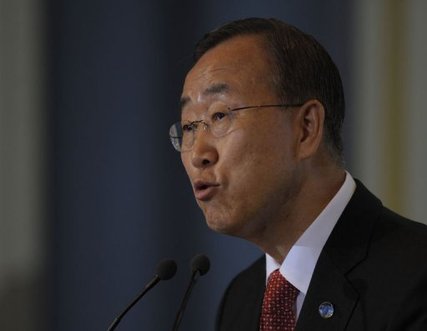 U.N. Secretary-General Ban Ki-moon was forced to rough it on an overnight bus to meet Argentine leaders on Monday because of Chile's volcanic ash cloud. Worse still -- it was his birthday.

Ban became the highest-profile person to fall victim as the eruption of Chile's Puyehue volcano, high in the Andes, entered a second week, spewing ash that has disrupted air travel from South America to Australia.

Ban did not have time to change his arrangements after his flight was diverted to Cordoba and he had to slog it 700 kilometers (440 miles) overnight to Buenos Aires in a bus.

"He and his delegation went to the capital by bus through the night," said U.N. spokesman Martin Nesirky.

All ended well as Ban, who marked his 67th birthday on Monday, made it to the capital in time to meet Argentine leaders and win their support for a second term as secretary-general.

"We are very happy to welcome him and to say to him that we support with joy his re-election," said Argentine President Cristina Kirchner.

She expressed sympathy, but noted that Ban was at least able to enjoy a favorite Argentine treat for breakfast at a filling station -- alfajores (homemade layered cookies with caramel filling) with coffee.

"I regret not being able to change the weather by decree," she added. "It was a long trip."

U.S. Secretary of State Hillary Clinton meanwhile had to cut short a trip to Africa on Monday to avoid another ash cloud from a separate volcanic eruption in Eritrea, a U.S. official said.