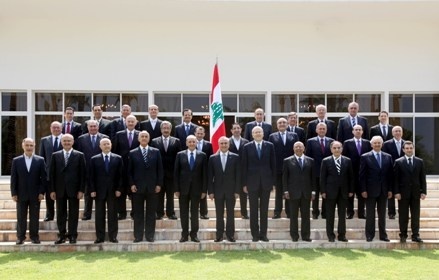 Al-Mustaqbal newspaper, mouthpiece of Saad Hariri’s al-Mustaqbal movement, reported on Thursday that the commemorative photograph of the new cabinet was aimed at “saluting” the “Black Shirts,” in reference to Hizbullah.

The dark color worn by the ministers was “an obvious violation of the protocol of wearing white suits” during official occasions in the summer.

The daily said that the new ministers, along with PM Najib Miqati, tried to hail the “Black Shirts” in reference to the January 18, 2011 incident, when several groups of Hizbullah supporters gathered in the streets of Beirut wearing black shirts, after the Special Tribunal for Lebanon filed indictments in the assassination of ex-Premier Rafik Hariri.

Al-Akhbar newspaper said, however, that the ministers received “instructions to wear dark suits in an obvious breach of protocol that states the use of white suits in occasions that concur with the summer (beginning of May).”

The newspaper reported that such a move is not unprecedented after President Michel Suleiman, ex-PM Saad Hariri and Speaker Nabih Berri wore black suits during Army Day on August 1.

and who cares?
is this the criticism coming from the opposition? is going to be like this the opposition campaign?
I thought Lebanon had biggest problems than the colour of the suits of the Government members at official occasions.
congrats, mostaqbal!

How very sad, shows how professional that newspaper is...