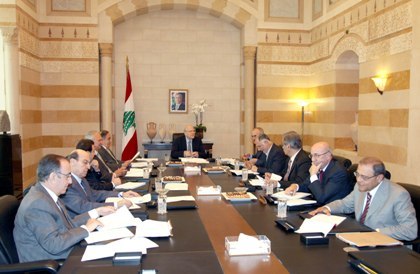 The first meeting for the committee charged with drafting the new government’s policy statement was held at the Grand Serail on Thursday under Prime Minister Najib Miqati.

Ministerial sources told the daily An Nahar in remarks published on Thursday that statement will likely be short and concise, stipulating the government’s goals on the internal scene and the principles that will dictate its policies.

They added that the policy statement will probably include points similar to those of the passed government, even if the March 14 camp decided to boycott the new Cabinet, but “it will try to phrase it in a certain way that will stress Lebanon’s international commitments while maintaining its state’s right over its sovereignty and stability.”

Meanwhile, another ministerial source told As Safir newspaper that the statement will set people’s concerns as a priority, with “issues that were previously labeled as contentious will be dealt with responsibly in order to maintain Lebanon’s unity and greater interests.”

Other sources told al-Liwaa newspaper in remarks published on Thursday that the statement will include Lebanon’s commitment to international resolutions.

They noted however: “It is unclear whether these resolutions will be specified or if the statement will refer to them with generalities.”

Voice of Lebanon later revealed that the committee will convene again on Tuesday.