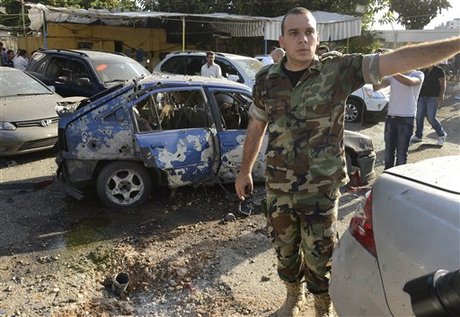 Head of al-Mustaqbal parliamentary bloc, former premier Fouad Saniora, on Sunday condemned “the criminal rocket attack that targeted neighborhoods in Beirut's southern suburbs,” describing it as a “dangerous development” and urging a “quick probe to identify the perpetrators and bring them to justice.”

"Those who committed this act are criminals who must be punished because sabotaging security and attacking innocent people is a service for Lebanon's enemies," Saniora said from Jordan, where he is taking part in the World Economic Forum on the Middle East and North Africa.

Meanwhile, Lebanese Democratic Party leader MP Talal Arslan said “this filthy act aims at stirring a sedition that would be part of the Zionist scheme that is targeting our Arab region, especially in Syria, and reflecting negatively on Lebanon.”

"Whoever targets Beirut's southern suburbs would be targeting the diverse pillar of the resistance and the pillar of national dignity, whose honorable residents made precious sacrifices for the sake of this country and who will not be affected by sedition schemes because they will confront them with their faith and sacrifice,” Arslan added.

“Those who targeted the Mar Mikhail Church -- where the historic memorandum of understanding was signed between Hizbullah and its Christian allies – are trying to target every diverse national formula, in a bid to push for further sectarianism, isolationism and federalism, and this is what we will not allow,” Arslan added.

For his part, Lebanese Forces leader Samir Geagea denounced the attack, saying it would be a “very dangerous development if the entire situation was not addressed.”

"Hizbullah's blatant intervention in the fighting in Syria is behind this unprecedented incident, which indicates that things can deteriorate in a very dangerous manner,” Geagea said in a press release.

He reiterated his call for Hizbullah to “end its military and security involvement in Syrian affairs immediately.”

Marada Movement leader MP Suleiman Franjieh said “the firing of two rockets on the Dahiyeh area in Lebanon is an act of terror which will not achieve its objectives,” noting that “the aim is to undermine the country's stability and security.”

Phalange Party leader Amin Gemayel also deplored the attack, describing it as “a dangerous indication that requires vigilance from everyone to avoid dragging Lebanon into strife.”

"What happened obliges us to reiterate the Phalange Party's warning regarding the threats of involvement in the quagmire of the Syrian crisis and the need to avoid interference in the Syrian blaze,” Gemayel said in a statement.

The rocket attack is "the normal result of the ongoing intervention in Syria," Gemayel added, noting that "Lebanese has enough problems and what happened and the current events are an attempt at importing the wars of others into the Lebanese arena once again."

"All leaders must rise above personal interests and crazy bets and must think of Lebanon before anything else,” Gemayel said.

He voiced concern that “we might be before a new phase during which Lebanon will be dragged into a new adventure that does not concern it and whose consequences it cannot bear.”

Meanwhile, Prime Minister-designate Tammam Salam described the incident as a "suspicious act that aims to stir sectarian strife in the country."

"The incident's malicious objectives are exposed to the political leaders and the Lebanese public opinion and must push them all to exercise awareness in order to prevent anything that might stir sedition and to immunize the national fabric against internal seditions and external storms,” Salam added.

He urged political leaders to “achieve this goal and shift the country from the current crisis into the state of stability and security longed-for by all the Lebanese.”

Salam also voiced regret over “the casualties and material damage caused by the two rockets,” calling on officials to “exert utmost efforts to identify the perpetrators and punish them.”

Salam had received a phone call from caretaker Interior Minister Marwan Charbel who briefed him on the details of the incident and the investigation.

No need to have the Nobel prize to know this.