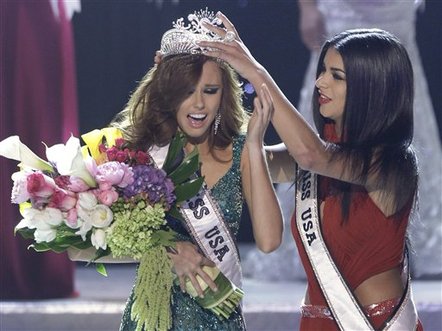 A 21-year-old auburn-haired California model won the Miss USA crown and will represent the United States in this year's Miss Universe pageant.

Alyssa Campanella of Los Angeles topped a field of 51 beauty queens on Sunday to take the title at the Planet Hollywood Resort & Casino on the Las Vegas Strip. She strutted across the stage in a blue bikini with white polka dots and a dark turquoise Sherri Hill evening gown with beading on its top.

She also answered a question about legalizing marijuana by saying she didn't think it should be fully legalized as a solution to help ailing economies.

Campanella told reporters in a news conference after the pageant that the win validated her decision to quickly move to Los Angeles from New Jersey after losing an apartment.

"The downs happen for a reason," she said. "The path that I'm on now is the path that's been meant to be."

Campanella, a former Miss Teen USA runner-up from 2007, when she represented New Jersey, said she has been competing in pageants since she was 15 because of her mom.

"I was going through a tough time in high school and she thought it'd be a great way for me to meet other girls throughout the state," she said. "It's Mom's fault."

Originally from Manalapan, New Jersey, Campanella began modeling at age 16, graduated from high school a year early and received a scholarship to the New York Conservatory for Dramatic Arts, according to her personal website.

Campanella, a history buff who says in her Twitter bio that she was "born in the wrong time period," said she thought the marijuana question posed to her from "Real Housewives of New Jersey" housewife Caroline Manzo was fair, given that she represents California.

"Well, I understand why that question would be asked, especially with today's economy, but I also understand that medical marijuana is very important to help those who need it medically," she said during the pageant.

"I'm not sure if it should be legalized, if it would really affect, with the drug war," she said. "I mean, it's abused today, unfortunately, so that's the only reason why I would kind of be a little bit against it, but medically it's OK."

Marijuana has been legal for medical use in California for about 15 years.

Miss Tennessee Ashley Durham was the first runner-up, while contestants from Alabama and Texas placed third and fourth.

Campanella, a natural blonde, said she dyed her hair six years ago for a part in a play, for a "fiery" character with whom she found she had traits in common.

"It's really brought out the true Alyssa Campanella, I feel, and that's why I really enjoy being a redhead," she said.

Campanella replaces Miss USA 2010 Rima Fakih. The 25-year-old of Lebanese origin from Michigan teared up as she walked across the stage for a final goodbye.

The contestants were whittled to 16 after the show's opening number, in which the beauty queens introduced themselves one-by-one. The top 16 were picked by preliminary judges through competitions and interviews during the week before the telecast. Celebrity judges picked the top eight after the swimsuit competition and the top four after the evening gown portion.

Durham appeared to stumble as she answered a question from celebrity chef Rocco DiSpirito about whether the First Amendment should protect burning religious books, as it protects burning the flag.

"I know that some people view it as a freedom of speech, however, burning the American flag is not patriotic at all," Durham said. "No American citizen should do that, and you should also respect other religions. I'm a Christian and a faithful person. I would personally not appreciate someone burning the Bible, and that's just a line you do not cross."