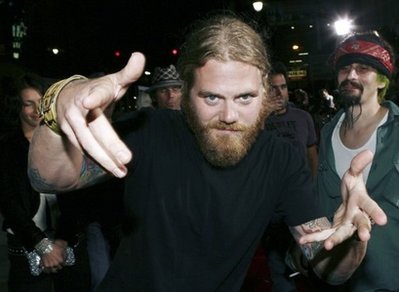 US comedy stunt television show "Jackass" lost one of its stars when Ryan Dunn, known for his death-defying and often car-related pranks, died in a car accident early Monday, MTV said.

Police said the accident took place around 2:30 am (0630 GMT) in West Goshen Township, Pennsylvania, and that Dunn was probably speeding at the time. An unidentified passenger was also killed.

Dunn's 2007 Porsche 911 GT3 burst into flames after the crash. It was found off the road and in the woods.

"Speed may have been a contributing factor to the accident," the West Goshen Township Police Department's report read.

"Upon arrival, police located one vehicle off the road and in the woods that was fully engulfed in flames."

A photograph posted to Dunn's Twitter account about two hours before the accident showed him drinking what appeared to be alcoholic beverages with two male friends.

"We are devastated by the tragic loss of Ryan Dunn -- a beloved member of the MTV family for more than a decade," said Van Toffler, president of MTV Networks Music/Film Group that broadcast the "Jackass" series that ran from 2000-2002 before spinning off into a successful film franchise.

"He made us all laugh and had the tireless enthusiastic approach to life of your favorite middle school friend. Our thoughts and deepest condolences are with Ryan's family and friends. The Jackass brotherhood will never be the same."

"Jackass 3D" debuted with a whopping $50 million in ticket sales in October.

More recently, Dunn and "Jackass" co-star Steve-O teamed up for a June 8 episode of the NBC TV game show "Minute to Win It," and hosted the shows "Homewrecker" (MTV) and "Proving Ground" (G4 television).

One of his most famous stunts involved inserting a toy car in his rectum and then going to the doctor for an X-ray as part of his "Butt X-Ray" prank.