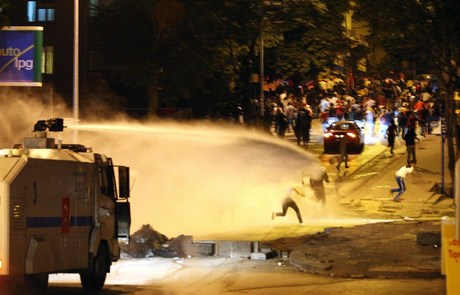 Turkish police used water cannon on Saturday to disperse thousands of demonstrators who had gathered anew in Istanbul's Taksim Square, calling for the resignation of Prime Minister Recep Tayyip Erdogan.

Hundreds of riot police backed up by water cannon trucks moved in on several thousand protesters chanting for Erdogan's dismissal.

"This is but a start, the battle continues!" the protesters yelled, throwing red carnations. "It is by resisting that we will prevail!"

The protesters had gathered a week after police evicted thousands of people from the adjacent Gezi Park, the epicenter of nationwide demonstrations that had shaken Turkey for much of June and presented Erdogan and his Islamic-rooted government with the biggest challenge of their decade-long rule.

Following the eviction, the protests that had infuriated Erdogan and earned Turkey harsh criticism from the West had fizzled out as the premier claimed victory over "traitors".

"The people and the AKP (ruling Justice and Development Party) government have foiled the plot... hatched by traitors and their foreign accomplices," Erdogan said on Tuesday.

Confident he has weathered the storm, he warned against any resurgence of the protests.

"From now on, there will be no question of showing any tolerance to people or organizations who engage in violent acts."

The crisis began when a small campaign to save Gezi Park's 600 trees from being razed in a redevelopment project was met with a brutal police response on May 31.

The violence sparked widespread anger and snowballed into mass demonstrations against Erdogan, seen as increasingly authoritarian, before culminating in another crackdown on Gezi Park.

Four people have been killed and nearly 8,000 injured in the turmoil, according to the Turkish Medical Association.

Hundreds have also been arrested across the country in connection with the demonstrations and at least 46 people have been charged, most of them accused of belonging to "terrorist" groups and destruction of property, according to lawyers groups.

Ankara's handling of the protests has sparked criticism from the West, leading to a flare of tensions with Germany in particular.