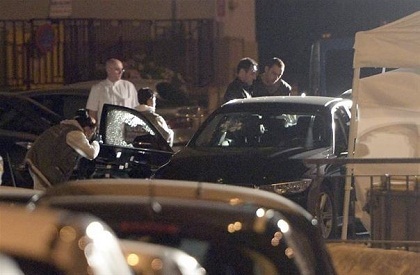 A 27-year-old man has been shot dead in Marseille in a slaying reminiscent of a scene from "The Godfather" that was the 10th murder of its kind in and around the city this year and the 34th since the start of 2012.

Djibril Abbas, who had a record of violent armed robbery and drugs offenses, was shot around 30 times after being ambushed by three men as he left a girlfriend's home in the Bon Secours district of the southern port on Saturday evening, police said.

The BMW he was driving was riddled with more than 40 bullet holes and police said the murder scene was strewn with shells of the kind used with Kalashnikov automatic rifles.

"This was a real ambush," a police source said of an attack that, in its brutality, recalled the killing of fictional mafia don Sonny Corleone in "The Godfather".

As in the post-war New York of Francis Coppola's 1972 masterpiece, the real-life contemporary violence in Marseille has its roots in feuds between rival gangs involved in the southern port's drugs trade, police say.

Gang-related murders this year have included one last month in which a 17-year-old dealer was shot 20 times with an automatic pistol and a double killing in March that took place in broad daylight and was witnessed by children on a rundown social housing estate.

The latter incident sparked a protest movement among local residents who have called on the government to put in place a "Marshall plan" for the city's poorest neighborhoods.

Others have argued for a crackdown on crime, with one local politician advocating the deployment of troops in the northern quarters of the city.

The government rejected that proposal and has designated two areas of Marseille as special security zones, making them eligible for additional resources to combat crime and anti-social behavior.

Interior Minister Manuel Valls claimed late last month that this policy was beginning to bear fruit, but critics accuse the government of ignoring underlying problems of poverty, unemployment and the marginalization of ethnic minorities.

Despite the regeneration of its old port and the boost it has received from being named as the 2013 European City of Culture, Marseille remains a poor city with fewer than one in two households paying any income tax.