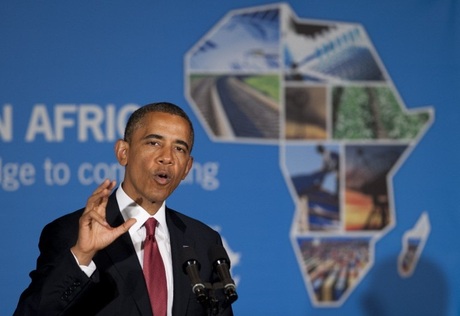 "The countries surrounding Congo, they have got to make a commitment to stop supporting armed groups," Obama told a press conference in the Tanzanian commercial capital, where he is wrapping up a three-nation African tour.

Both Rwanda and Uganda have been accused of supporting the M23, the armed group that briefly occupied the eastern DRC town of Goma in November, routing the government troops stationed there.

Both countries have denied the charges.

He also called on DRC President Joseph Kabila to make more headway with reforming his country's armed forces, saying he "has to do more and better in dealing with the DRC's capacity on security issues".

DR Congo's army -- even the so-called elite units trained by foreign powers -- is notorious for its ill-discipline and lack of motivation, with troops often running away and engaging in looting in the face of rebel attacks.

"The people of Congo need a chance," Obama added. "They have not had that opportunity because of constant conflict and constant war for way too many years."

He said DRC's "tragedy" was compounded by the fact the country is so rich in natural resources.

On the much-trumpeted framework agreement signed in February and aimed at restoring peace to DR Congo's turbulent east, Obama said: "It can't just be a piece of paper, there has to be follow-through."