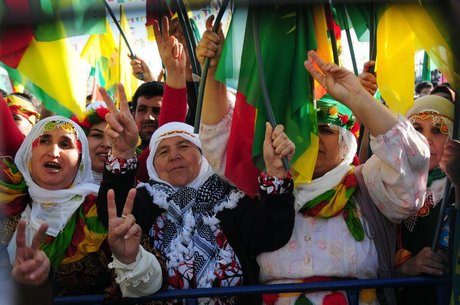 Turkish Prime Minister Recep Tayyip Erdogan on Tuesday vowed to continue the fragile peace process between the government and the country's Kurdish minority which looked threatened by a weekend of rallies sparked by the death of a young protester.

"This problem didn't start yesterday and it will need a lot of work and patience," he said at a weekly meeting of his deputies from the Islamist-rooted Justice and Development Party (AKP).

"Everyone needs to stay calm and be patient," he said, vowing that "nothing" would stop him from completing a full reconciliation with Turkey's estimated 15 million Kurds. "The peace process will continue," he said.

The death of a young Kurdish man during a protest on Friday in the southeastern town of Lice triggered a day of rallies in the region organised by the pro-Kurdish Peace and Democracy Party (BDP), dispersed by Turkish riot police using tear gas and water cannon.

Erdogan claimed the protests and the kidnap of a sergeant released on Monday were organized by the Kurdish Workers' Party (PKK) members which, he claimed, were unhappy that a supply route for alleged drug trafficking would be threatened by an increased police presence in the area.

"We must uncover the true motivation for these events," Erdogan said. "What was really behind the incident in Lice was cannabis."

Local authorities claim that 500 tonnes of the drug were cultivated in southeast Turkey in 2012, an industry they believe is entirely the work of the PKK.

The PKK's imprisoned leader Abdullah Ocalan declared a historic ceasefire in March after months of clandestine negotiations with the Turkish secret service with an ultimate goal of disarming the rebel fighters.

As part of the truce, Ocalan's PKK, labelled as a terrorist group by Turkey and its Western allies, agreed to withdraw its 2,000 estimated fighters from Turkey to their bases in northern Iraq, which should be completed before winter.

The BDP said Sunday one of its main demands was to ensure freedom for Ocalan, who has been serving a life prison term on a remote island off Istanbul since his 1999 capture.