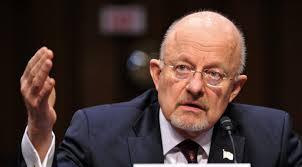 U.S. National Intelligence Director James Clapper has apologized for telling lawmakers the National Security Agency does not collect data from Americans' phone records and Internet use.

Clapper had been asked by Senator Ron Wyden at a March 12 hearing if the NSA had gathered "any type of data at all on millions or hundreds of millions of Americans," and the spy chief replied: "Not wittingly."

Leaks from a former contractor for the NSA, Edward Snowden, in recent weeks have since uncovered a far-reaching "data-mining" program that scoops up telephone records and some Internet communications of Americans.

The revelations forced the spy chief to correct what he called his "erroneous" testimony before the Senate panel, according to a letter posted online by the Office of the Director of National Intelligence.

In a letter to the chair of the Senate Intelligence Committee, Senator Dianne Feinstein, Clapper said he wanted to "set the record straight" given the "heated controversy" prompted by his remarks.

Clapper wrote that his answer had mistakenly focused on different intelligence gathering activities that allow for spying on the content of communications only under specific guidelines and a judge's approval.

He said "my response was clearly erroneous -- for which I apologize."

Clapper's staff immediately acknowledged the error to Senator Wyden's aides after the hearing but did not issue a public apology as the data collection program had remained classified until recently, according to the spy chief.

"I can now openly correct it because the existence of the metadata collection program has been declassified," he said in the letter, which was dated June 21.

Clapper said he had appeared before Congress dozens of times over his decades-long career and always prepared "rigorously" for hearings. But he said "mistakes will happen, and when I make one, I correct it."

At the time of the hearing, Wyden's aides had expressed "serious concern" to Clapper's office over its refusal to publicly correct his "inaccurate" statement, the senator's spokesman Tom Caiazza told Agence France Presse.

"Senator Wyden is deeply troubled by a number of misleading statements senior officials have made about domestic surveillance in the past several years," he said.

The senator "will continue pushing for an open and honest debate about programs and laws that touch on the personal lives of ordinary Americans," he added.

Leaks from the former NSA contractor Snowden confirmed the U.S. government was continuing to collect phone records of Americans, a program first revealed in 2006. And Snowden has also disclosed a program code-named PRISM that allows the government to collect emails, photos and other Internet traffic to track "foreign targets."