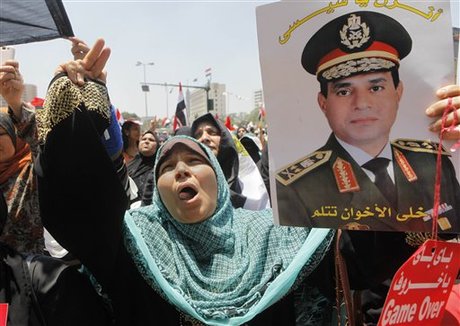 Turkey's prime minister on Friday condemned the military intervention that toppled Egypt's Islamist president Mohamed Morsi as an enemy of democracy, and chastised the West for failing to brand the ouster a coup.

Referring to his country's history of coups, Recep Tayyip Erdogan warned that such military uprisings come at a heavy price and must not be tolerated.

"No matter where they are... coups are bad," Erdogan said in televised remarks. "Coups are clearly enemies of democracy.

"Those who rely on the guns in their hands, those who rely on the power of the media cannot build democracy.... Democracy can only be built at ballot box," said Erdogan, who had forged friendly relations with Morsi during the Egyptian's one-year in power.

Erdogan also lashed out at the West for shying away from calling the military intervention a coup, while welcoming the African Union's decision to suspend Egypt over the army's actions.

"The West has failed the sincerity test," said Erdogan. "No offense, but democracy does not accept double standards."

World powers have urged Egypt to return to democracy, but the call was offset by a lack of condemnation of the overthrow of the Islamist leader.

Referring to coups in Turkey's recent history, Erdogan said his country served as a "very important reference" to Egypt on why military uprisings must not be tolerated.

Turkey's once omnipotent army, which has long considered itself as the self-appointed guardian of Turkish secularism, has staged four coups in half a century.

"Each military coup, with no exception, has caused Turkey to lose decades," Erdogan said.

Since coming to power in 2002, Erdogan's Islamic-rooted government has sought to curb the powers of the military, throwing hundreds of army officers behind bars for alleged coup plots.

Lol but military intervention in Syria is ok? And also protesting is amazing, until it happens to u?

This guy is funny. He sounds like bashar when he praised the protesters for bringing down morsi. Lol are these politicians serious? I don't get it.

Iran praises the revolution in Bahrain... But go as far as turning off the Internet :/ to crush their own.

The gulf pay for a revo in Syria... But send their armies to crash Bahrainis.

Turkey condemns the Syrian govs heavy hand with protesters... But respond the same way with theirs.

Muslim brotherhood were oppressed by a dictator so many years... Finally get in power and does the same thing. :/

Harriri is killed... His own ppl lie to the courts about who did it.

(In Reply to beirutbastard00)
Your post is all about the Syrian/Lebanese crisis! etc... etc...What's happening in Egypt is completely different.

The beginning wasn't, then it turned into a rant. I'm just saying these politicians are funny.

Plus the article was about ardogans feelings about Egypt, not about Egypt. Just yesterday they had one about bashar, only he was happy about Morsis ouster...