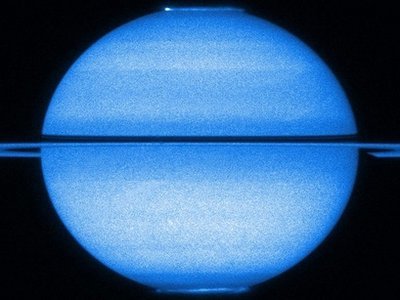 A strange moon of Saturn may have a salty ocean lurking beneath its iceball surface, according to a study appearing Wednesday in the British journal Nature.

The discovery comes from data from the U.S.-European orbiter Cassini, which has been touring the giant planet and its ring system since 2004.

One of Saturn's most intriguing moons is Enceladus, a worldlet measuring only 504 kilometers (315 miles) named after a Titan who stirred a revolt against the Olympian gods.

Enceladus is unmarked by asteroid impacts, for its surface is encased in a dazzling white shell of ice that is pristine except for deep ridges near its south pole.

They spawned the idea that a sea could lie beneath the moon's crusty mantle.

The notion is counter-intuitive, for Saturn is so distant that the Sun is just a tiny point and the ambient temperature in space is near absolute zero (minus 273 degrees Celsius, minus 460 degrees Fahrenheit).

The new study takes the innovative theory further by sifting through data sent back from 2008 and 2009, when Cassini made three passes to "taste" the enigmatic plumes.

The scout has an onboard sensor called the Cosmic Dust Analyser (CDA) which collided with the grains at up to 18 kilometers (11 miles) a second, instantly vaporising them.

Grains found farther out from Enceladus are relatively small and ice-poor, matching shiny granules in the "E" ring which traces the moon's orbit around the Saturn -- and indeed may be their origin.

In contrast, grains found closer to Enceladus are larger and richer in salt.

Some 99 percent of the mass of the "tiger-stripe" particles comprise these salt-rich grains, which tend to fall back onto the moon's surface rather than make it to the "E" ring.

They point to a source that is liquid salt water rather than Enceladus' icy surface, the study maintains.

This is because when salt water freezes slowly, the salt is literally squeezed out, leaving a pure water ice behind. Thus if the grains had come from the surface ice, there should have been very little salt in them, but this was not the case.

Around 200 kilos (440 pounds) of water vapor is lost every second from the plumes, along with smaller quantities of ice grains.

Theorists suggest the tiny moon is geologically active thanks to a phenomenon called tidal heating.

It suffers a ripping gravitational pull from its giant mother, and from the nearby satellites of Dione and Janus.

As a result, according to their hypothesis, its guts are stretched and squeezed, causing friction that warms an ocean probably lying in a layer about 80 kilometres (50 miles) beneath Enceladus' crust and beneath the moon's rocky core.

Heat generated by radioactive decay in its rocks may also contribute to helping the ocean from freezing up.

The salt itself may come from rock that dissolves in the water.

When the moon's outermost layer cracks open, the reservoir is exposed to space, and the drop in pressure causes the liquid to evaporate into a vapour, with some of it freezing into salty ice grains that form the plumes.

If so, two potential elements for life as we know it -- liquid water and energy -- exist on this distant rock from the Sun.

"Enceladus is a tiny, icy moon located in a region of the outer Solar System where no liquid water was expected to exist because of its large distance from the Sun," said Nicolas Altobelli, the European Space Agency's project scientist for the joint mission.

"This finding is therefore a crucial new piece of evidence showing that environmental conditions favorable to the emergence of life may be sustainable on icy bodies orbiting gas giant planets."