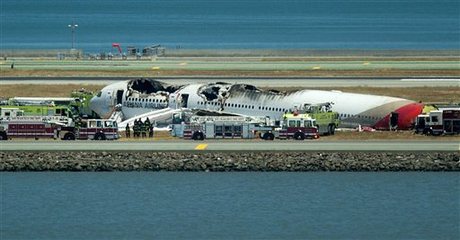 The South Korean Boeing 777 which crashed in San Francisco after landing short of the runway was only seven years old and had no known mechanical problems, the Asiana Airlines CEO said Sunday.

"We purchased this airplane in March 2006... currently we understand that there are no engine or mechanical problems," Yoon Young-Doo told a press conference, adding that the two people killed were Chinese nationals.

South Korea's transport ministry said separately both the dead were female, born in 1996 and 1997.

The ministry said the plane's tail hit the runway and the aircraft veered to the left off the runway. A total of 181 people were injured.

Yoon said the crew had made an in-flight broadcast as usual, "asking passengers to buckle up for landing. There was no emergency alarm".

"Our pilots strictly comply with aviation rules," the CEO said.

He said the two people who died were passengers seated at the back of the plane.

"Please accept my deepest apology," the CEO said, bowing in front of TV cameras at the press conference.

"We'll make our utmost efforts to cope with the tragedy."

The plane, which originated in Shanghai and picked up passengers in South Korea before heading to San Francisco, had 291 passengers and 16 crew on board.

Among them, 141 were Chinese nationals, followed by 77 South Koreans, 61 Americans, one Japanese, three Indians, three Canadians, one French, one Vietnamese, three others with unidentified nationality and 16 crew.

Anxious relatives swarmed around Asiana's headquarters in Seoul, seeking details of the crash and the whereabouts of the victims.

"I'm very worried about my daughter. She called me a while ago saying she received injuries to the shoulder and legs," a middle-aged woman told journalists.

"But since then, I've heard no word from her. I wonder where she is now."

"I offer my deepest condolences to the victims and their relatives," her spokeswoman quoted her as saying.

"All government agencies concerned will join forces to provide all necessary assistance and resources to deal with the disaster."

A group of some 20 South Koreans including government officials and Asiana staff left on a special flight for San Francisco, the transport ministry said.

It was the first fatal crash of a passenger jet in 20 years for Asiana, South Korea's second-largest airline.

You are so blinded rft. It is a Saudi-Wahhabi-salafi-cannibal-NIGERIAN attack on the innocent of Syria and Lebanon (m8 and Assad)