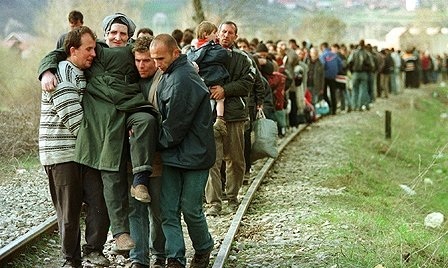 Kosovo took Thursday a key step towards normalization of its ties with Belgrade, granting amnesty to Serbs in the breakaway territory who have opposed through violence its 2008 independence from Serbia.

The amnesty bill, aimed at facilitating implementation of an EU-brokered agreement on improving relations with Serbia, was passed by huge majority of 90 Kosovo lawmakers in the 120-seat parliament, speaker Jakup Krasniqi said.

It is a key part of the April 19 accord on normalization of relations between Serbia and majority ethnic Albanian Kosovo and should open the door to its full realization, including the integration of Serbs from tense northern Kosovo in public services and institutions under Pristina's control.

Although not specifically referring to any ethnic group, the amnesty law is aimed at making accountable ethnic Serbs in the north who have opposed the Kosovo's independence through violence, including attacks against international and local security forces, and by erecting barricades or carrying out other acts of civil disobedience.

According to the bill, all perpetrators of around 70 offences "that were committed before June 20, 2013, shall be granted a complete exemption from criminal prosecution or from the execution of punishment for such offences".

An amnesty is granted for the crimes of armed rebellion, jeopardizing territorial integrity or the constitutional order by damaging or destroying the public property.

Also, released from prosecution will be those suspected of espionage, unlawful crossing of border, smuggling, acts against the police, putting up resistance or arson.

However, the bill does not envisage reductions in punishments for those convicted of crimes including murder, manslaughter, harassment, defamation, assault and theft.

It also stated that all criminal offences which resulted in bodily harm and murder will not be subject to amnesty.

Serbia has set amnesty Kosovo's Serb minority as a key condition for further implementation of the accord with Pristina, including ethnic Serbs' participation in local elections set for November.

Belgrade and the ethnic Serbs -- who number about 40,000 in northern Kosovo -- have rejected Pristina's unilaterally proclaimed independence.

But under EU mediation, Belgrade agreed to encourage the Serb minority in Kosovo to comply with the Pristina authorities, provided they are given a certain level of autonomy.