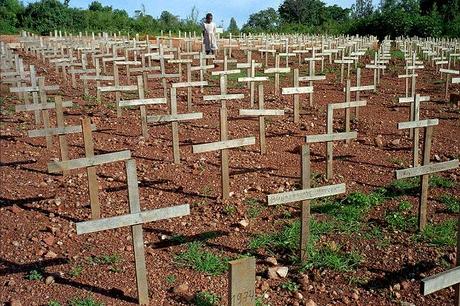 French police have arrested a former Rwandan colonel wanted for his alleged role in the east African nation's 1994 genocide, his lawyer said Saturday.

Laurent Serubuga, around 75 years old, was apprehended near the northern French city of Cambrai on Thursday under an international arrest warrant issued by Rwanda, lawyer Thierry Massis said.

Serubuga was being held in detention and a hearing has been scheduled for next Thursday, but may be postponed to a later date, the lawyer said.

Serubuga was a deputy Rwandan army chief of staff during the April-July genocide in 1994 in which an estimated 800,000 people, mostly minority Tutsis, were killed by the ethnic majority Hutus.

"Colonel Serubuga had as much responsibility in the genocide as colonel (Theoneste) Bagosora," he said, referring to the most high-profile figure condemned by the International Criminal Tribunal for Rwanda.

Bagosora, described by the prosecution as the mastermind of the genocide, was sentenced to 35 years in prison in 2011.

The French have not yet understood to what extent did their role contribute to the Genocide in Rwanda. Why wait all this time to arrest this notorious Col Serubuga.

This is a good news for the week.But we can't say Kumbayaaaa because we all know that France has been protecting those genocidaires for so long.