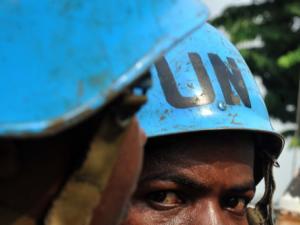 The U.N. peacekeeping mission in DR Congo (MONUSCO) on Wednesday denied accusations that it shelled Rwandan villages in recent clashes between the Congolese army and M23 rebels.

But MONUSCO hit back at the accusations in a statement, saying: "Not a single shot was fired (by its troops) on July 15, the date these 'bombardments' took place."

The U.N. statement called on Rwanda to submit any complaint to the enlarged Joint Verification Mechanism (JVM), a U.N.-backed panel of experts from Rwanda, DR Congo and other Great Lakes nations, that resolves border problems in the region.

The heated exchange came as the Congolese army continued its offensive against M23 rebels north of Goma, the capital of North Kivu province in eastern DR Congo.

"We are beating back the enemy in Kibati," an army official told Agence France Presse by telephone, a report corroborated by the president of the M23, Bertrand Bisimwa.

The M23 is an armed group launched by Tutsi former soldiers who mutinied from the Congolese army in April 2012 and occupied the flashpoint city of Goma for 10 days in November before withdrawing under international pressure.

Army spokesman Colonel Olivier Hamuli said Tuesday that the DR Congo's forces were gaining ground in the battle close to Goma as they sought to "wipe out M23".

In March, the U.N. Security Council decided to boost MONUSCO with an offensive brigade of 3,000 men who were given an unprecedented mandate to disarm rebel groups in the east of the country.

MONUSCO "has put its troops on high alert and stands ready to take any necessary measures, including the use of lethal force, to protect civilians," U.N. spokesman Martin Nesirky announced in New York.