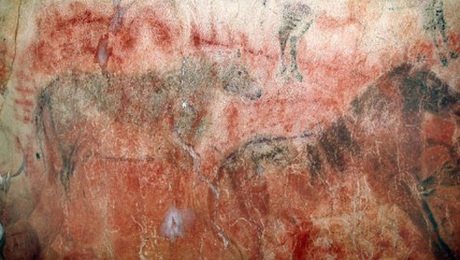 With trowels and paintbrushes, dozens of archaeologists in white hard-hats patiently sift the reddish-brown earth in the caves of Atapuerca, searching for remains a million years old.

From under strata spanning hundreds of millenia at this site in northern Spain, they unearth ancient mouse bones and the teeth of horses -- but what they most hope for is a sign of prehistoric humans that could write a new chapter in our evolution.

"The site covers a very long period of time, practically from when the first humans arrived in Europe, up to the present day," says Jose Maria Bermudez de Castro, one of the directors of the dig.

"If we add up all the sites found in the Sierra de Atapuerca, it covers a period from one and a half million years ago."

The site, near the city of Burgos, has been under excavation since 1978. In 2000 it was classed by UNESCO as a piece of world heritage.

"Most periods are represented here. That's what makes it a spectacular and unique site," Bermudez says.

In 2007 researchers found in one of the caves, the so-called Elephant Chasm, a human finger and jawbone dating back 1.2 million years -- considered the remains of the "oldest European" ever found.

Since then, they have found skulls, bones and teeth belonging to what archaeologists call Homo antecessor, who lived between 850,000 and 950,000 years ago.

This was followed by the discovery of bits of Homo heidelbergensis, from around four hundred millenia ago, in a cave known as the Bone Chasm.

"It is the site that has yielded the most human remains in the world," says Juan Luis Arsuaga, another of the directors of the project, before putting on his hard-hat with a mounted lamp and disappearing down the dark, narrow passage to the cave.

The team now hopes to find human remains in the oldest parts of the site, one and a half million years old.

The dig has still not unearthed evidence of more recent prehistoric humans such as Neanderthal and Cro-Magnon man, however, Bermudez adds.

These missing links leave a gap of some hundred thousand years for which the archaeologists have found tools but no human remains yet -- a small blip in the vast period to which the caves bear witness.

But the team is confident more will be revealed.

"There are just some short periods for which there are no remains," says Bermudez. "I think bit by bit we are finding them."

Through their finds, his team have reconstructed details of the prehistoric humans' lives.

In Homo antecessor's time, Atapuerca was peopled by hunters, around 30 of them spread over a dozen miles (around 19 kilometers) of land, says Bermudez.

They popped into the caves from time to time, but lived mostly in the open air in an area well supplied with water, vegetation and animals, including lions, hippos, rhinos and bison.

"Their physiology was probably different from ours," Bermudez says of the hunters. "They could better stand the cold and probably had a good layer of fat under their skin and more hair."

Territorial disputes were settled violently and sometimes ended with one tribe eating the members of another after killing them.

"They would eat them without any kind of ceremony," Bermudez says.

After the current digging season ends in July, the archaeologists will spend the rest of the year analyzing the thousands of fragments they have found. The choicest finds will be exhibited in the Museum of Human Evolution in nearby Burgos.

One group has found some relatively recent human remains, dating back 5,000 years and belonging to our own species, Homo sapiens. They are believed to have been placed in the cave in a funeral rite.

Higher up, where the distinct layers of earth track the millenia closer to our own times, remains dating from the Medieval period have been found.

"It is like a kind of history book of many pages," says Jose Miguel Carretero, an academic from Burgos. "It tells you stories about the first Europeans."