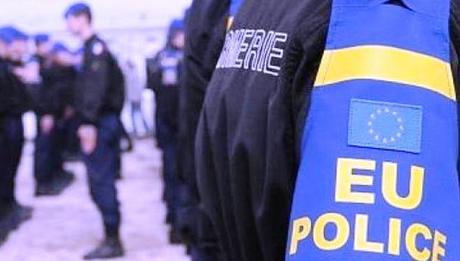 Two policemen were injured Monday as protesters stoned a EU vehicle in Serb-populated northern Kosovo in the first such incident since Belgrade and Pristina reached a deal on normalizing ties.

A European Union rule of law mission (EULEX) police patrol was stopped by protesters in the northern town Zvecan who soon began stoning the car.

"Two EULEX police officers were injured and the vehicle damaged... In an act of self-defense one policeman fired a warning shot in the air," the mission said in a statement.

The protest was organized as a response to earlier arrest in ethnically-divided flashpoint town Kosovska Mitrovica of two ethnic Serbs, suspected of an attempted multiple murder last year.

It was the first serious incident since April, when breakaway Kosovo and Serbia reached an EU-mediated accord aimed at normalization of relations between the former foes.

The deal, which is still being discussed in details, sets up a certain level of autonomy for some 40,000 ethnic Serbs living in northern Kosovo, alongside the border with Serbia proper over which Pristina has almost no control.

Although the plan was approved by the Serbian government, ethnic Serb hardliners in majority Albanian-populated Kosovo have opposed it, rejecting Pristina's authority by establishing their own assembly in the north.

Belgrade and Kosovo Serbs refuse to recognize the 2008 independence of Kosovo, although around 100 countries, including the United States and all but five EU member states, have done so.