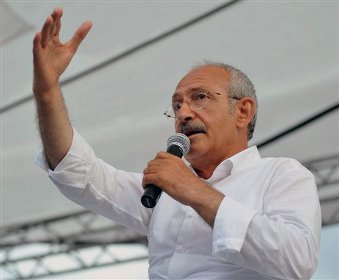 Turkey's new parliament opened in a tense atmosphere Tuesday as the main opposition and Kurdish deputies boycotted the ceremony in protest over lawmakers kept in prison.

It was hardly the start Prime Minister Recep Tayyip Erdogan would have hoped for after winning a third straight term in power in June 12 elections and promising to reconcile with the opposition for a major constitutional overhaul, his key election pledge.

"We ... will not take our oaths as long as our colleagues who have been barred from taking their oaths are not allowed to do so," CHP leader Kemal Kilicdaroglu said.

The protest cannot block the inauguration of the 550-member house, where Erdogan's Islamist-rooted Justice and Development Party (AKP) has a comfortable majority of 327 seats -- it is rather aimed at putting the AKP under political pressure to seek a solution to the controversy.

Lawmakers who are not sworn in cannot take part in parliamentary work.

Defying a 2007 precedent, the courts last week refused to free nine opposition lawmakers elected while awaiting trial in prison, and the electoral board stripped one of them of his seat over a terror-related conviction.

Two of them, journalist Mustafa Balbay and academic Mehmet Haberal, were elected on a CHP ticket. They have been detained for more than two years on charges of involvement in alleged plots to destabilize and overthrow the AKP.

Lawyers had sought their release arguing the suspects do not pose a risk of destroying evidence or fleeing the ongoing trial.

Kilicdaroglu charged the judges were acting under government pressure and accused the AKP of a "tendency towards a civilian dictatorship."

The massive coup probes, under way since 2007, are already under seen as part of a government-backed campaign to silence AKP opponents.

With trials advancing at a sluggish pace, dozens are kept in prison and prosecutors are yet to secure convictions.

Also barred from assuming their seats were six Kurdish activists, in prison on charges of links to the outlawed Kurdistan Workers' Party (PKK), which Ankara lists as a terrorist group for the 26-year separatist insurgency it has led in the southeast.

One of them was stripped of his seat in a separate legal move: the electoral board had first approved his candidacy but then ruled he was not eligible to run because of a 20-month sentence for remarks deemed PKK propaganda.

The loss of the seat, taken over by the AKP, triggered Kurdish outrage and resulted in a decision by the remaining 30 lawmakers to boycott parliament.

The Kurdish bloc gathered Tuesday in Diyarbakir, the largest city of the mainly Kurdish southeast, and vowed to maintain the boycott.

"From now on, we will hold our weekly meetings in Diyarbakir. We will keep our position ... until opportunities for settlement emerge," lawmaker Gultan Kisanak said, quoted by Anatolia news agency.

The controversy added to tensions in the southeast that had flared ahead of the polls amid PKK threats to step up violence in a conflict that has already claimed some 45,000 lives.

Facing calls for legal amendments to end the row, Erdogan has shown little sympathy for the jailed lawmakers, prompting reminders that he himself was the victim of a similar controversy when the AKP came to power in November 2002.

Erdogan became prime minister four months later after the AKP amended laws that had sidelined him from politics over a conviction for Islamist sedition.

Three years ago, a Kurdish deputy was freed after she was elected to parliament while awaiting trial in jail.