The Cairo Angels in Beirut telling their story 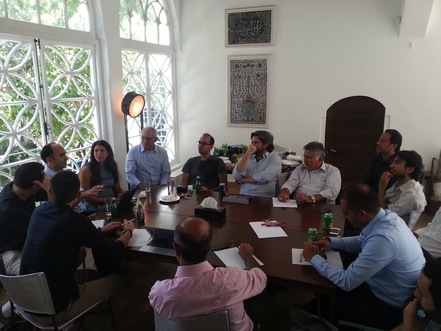 Angel investors in Europe are commonly between 45 and 60 years old, but in Cairo they are often in their late 30s to mid 40s.

Founder and President of Cairo Angels, Hossam Allam, shared his experiences with around 15 angels in the Arab World over lunch in Beirut, organized by Hala Fadel, chair of the MIT Enterprise Forum Pan Arab, on July 25. He stressed over the importance of the angel network in the region, and the necessity for collaboration among angels. Con O’Donnell Regional Entrepreneurship Advisor at MC Egypt LLC- part of Mercy Corps was also present at the lunch.

The Cairo Angels shared the story of their network. They have invested and mentored seven Egyptian companies with average tickets of $75K per company, using equity and convertible notes. While the entrepreneurs are 30-years-old on average, the investors are not much older and can invest $10K to $20K per year.

Allam explained that the Cairo Angels consist of young yet serious individuals that understand IT, are energetic and passionate about their investments. The founder and president associated investing in startups with collecting art, emphasizing that investment could be seen as a hobby that involves collecting and selling later on.

Passion aside, being an investor in the Arab world can sometimes be risky. In the US, the founder of the startup has to consult the investors before committing major change in the company, but in the MENA region, this is not the case. The legal structure in Egypt is not developed enough to protect the angel investors. Cairo Angels found their own legal solution instead of giving up on investing.

The founder and president of Cairo Angels stresses that it is not enough for angels to invest money, but that they should be investing time as well. For example, it is important for an angel to participate in the screening or lead the negotiation in at least one deal. From their experience, the Cairo Angels advise to have four to five angels per deal and not to take risks alone.

When watching a pitch, the Cairo Angels recommended that the angels in the Arab world always remain positive and supportive towards start-ups. They emphasized on the importance of not criticizing and keeping comments for after the pitching. Allam advised to only ask questions that would lead to a decision of whether to invest or not. Also, asking an expert’s opinion is important before investing.

It normally takes three to nine months to close a deal in the Arab region, say the Cairo Angels, but they would like to see this change. They believe that agility is a key factor in investments.

The Cairo Angels’ founder and president suggests there be a list of due diligence. They always make sure that the product is in the market or that a beta version exists, and that there is customer feedback. They also pay close attention to the structure of the company, such as a clear role for everyone, making sure that it is not a one-man job. It is with the due diligence that an angel will be able to evaluate the startup company and then possibly invest.

Naharnet peeps, please, you can do much better than this!

editorial rule No1: you need to explain who are the so called Angels to your readers instead of assuming everyone knows about them.
Editorial rule No.2: give some background on Cairo Angels/Arab countries Angels- you need to put it into context to make story more interesting.

Thanks for reading and we know Naharnet can do much better.

yep, i agree Lana; I just came across the Angels for the firs time, have no idea who they are (i am an educated person with phd degree).