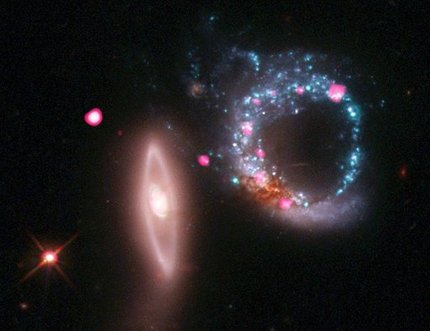 Astronomers said on Wednesday they had snared light from a bright, ancient galaxy with a super-massive black hole at its core, a finding that would help explain aspects of the young Universe.

The phenomenon is called a quasar, which are very bright but very distant galaxies with a mighty black hole at their heart.

Until now, the most distant quasar ever seen sent light 870 million years after the Big Bang, which is believed to have occurred nearly 13.7 billion years ago.

This record has now been beaten by European astronomers, who after a five-year probe found a quasar whose light was emitted just 770 million years after the cosmic birth.

"This quasar is a vital probe of the early Universe," said team leader Stephen Warren of the astrophysics group at Imperial College London.

"It is a very rare object that will help us to understand how super-massive black holes grew a few hundred million years after the Big Bang."

Measurements show the quasar's black hole has a mass about two billion times that of the Sun, a size hard to reconcile with current theories.

Super-massive black holes, according to a common hypothesis, should take billions of years to build up as they gradually suck in matter from their surroundings.

The quasar was born in the last part of "re-ionization", an era when a veil of hydrogen gas that smothered the expanding cosmos was cleared by ultraviolet light from early stars.

The study, which appears in the journal Nature, used the European Southern Observatory's Very Large Telescope in Chile and a British-operated infrared telescope in Hawaii.