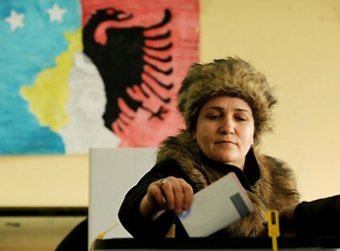 Kosovo's Serb minority leaders on Friday said they would boycott local polls in November, despite appeals by Belgrade to participate as part of a landmark EU-brokered deal with Pristina.

"As the elections... will be organised in accordance with Kosovo constitution and laws, they are unacceptable" for the Serbs living in the north of the breakaway territory, local representatives told reporters in the northern town of Zvecan.

Some 40,000 Serbs live in northern Kosovo along the border with Serbia proper.

They still refuse to recognize Pristina authorities after Kosovo proclaimed independence from Serbia in 2008 and they boycotted 2010 local polls.

The election to choose mayors and local councilors, scheduled for November 3, is part of an accord between Belgrade and Pristina reached in April with mediation from Brussels.

According to the deal, which is aimed at normalizing ties between the former foes, Serbia is to encourage the Serb minority in Kosovo to participate in the upcoming polls.

At a meeting with Kosovo Serb representatives earlier this week, Serbian President Tomislav Nikolic called on their community to take part, saying that Belgrade "will not encourage the boycott."

But Slavko Stevanovic, one of the Kosovo Serb leaders, said on Friday they would press on with the boycott nonetheless.

"We do not want to confront Belgrade, but we can't accept such advice, as our participation in the polls will be contrary to the Serbian constitution" which stipulates that Kosovo is a part of Serbia, he said.

But under the new accord, Belgrade has agreed to encourage the Serb minority in the breakaway territory to comply with the Pristina authorities, provided they are given a certain level of autonomy.