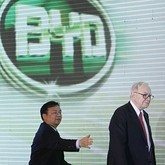 Chinese car maker BYD, backed by billionaire Warren Buffet, said Wednesday it has ended a joint venture to provide financing for car purchases in China with a unit of France's Societe Generale.

However, in a statement to the Hong Kong stock exchange, BYD said: "CGL is of the view that the automobile market in the mainland China is facing increasing risks."

BYD added that it had a "different evaluation on the potential risk in association with the business and cannot reach consensus".

BYD, which saw first-quarter profit shrink 84 percent due to increasing costs and falling auto sales, said the decision would not have a significant impact on its financial position and business operations.

BYD reported earnings of 266.7 million yuan in the three months to March 31, well below its 1.7 billion yuan net profit in the same quarter last year. Operating revenue fell 12 percent in the quarter.

Despite this, shares of BYD -- which is already listed in Hong Kong -- soared 41 percent in their share debut on the Chinese mainland last week.

Analysts said the stellar trading debut showed some investors are giving BYD, which has powered ahead in development of clean-energy vehicles more aggressively than its peers, a significant premium for the long-term prospect of such cars.

BYD, which began as a manufacturer of rechargeable lithium-ion and nickel batteries, drew international attention when Buffett bought a 9.89 percent stake in it for $230 million in 2008.

China's auto sector overtook the United States in 2009 to become the world's largest car market but it has lost steam after Beijing phased out most sales incentives implemented to ward off the global downturn.