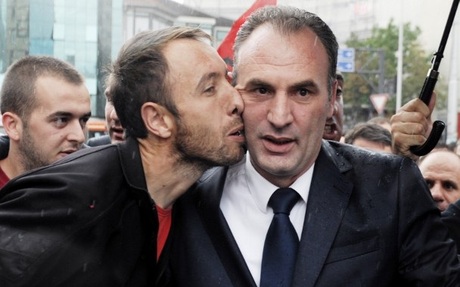 A EU-led court on Tuesday acquitted a top ethnic Albanian guerrilla commander-turned-politician of war crimes during the 1998-1999 Kosovo conflict, saying the evidence of the key prosecution witness was "wholly unreliable".

British judge Malcolm Simons, who chaired the court panel, said Fatmir Limaj and nine other former members of the Kosovo Liberation Army (KLA) were found not guilty of war crimes against the civilian population and prisoners of war.

The defendants were retried for allegedly abusing Serb and Albanian civilians and Serb prisoners of war at the Klecka detention center in central Kosovo during the war.

Limaj, currently a lawmaker in Prime Minister Hashim Thaci's Democratic Party of Kosovo (PDK), was the commander of the center.

The indictment was mainly based on the diaries and testimony of Klecka prison guard Agim Zogaj, known as "witness X", who became the main witness in the case before he was found dead in a park in Germany in September 2011.

However, Simons said the court found out that Zogaj's evidence "was not corroborated by reliable, independent evidence and was, in fact, inconsistent and contradicted by other evidence".

"Overall, the trial panel found that, in important material respects, the evidence of Agim Zogaj was wholly unreliable and that it would be unsafe to rely upon it to convict the defendants of the offenses in the indictment."

The trial has been the most high-profile case for the EU Rule of Law Mission in Kosovo (EULEX) since it was launched to assist the judiciary after Kosovo declared independence from Serbia in 2008.

The retrial was ordered by the Supreme Court of Kosovo in November when it annulled a lower court's acquittal of Limaj and his co-defendants on the same charges.

It was the first time a top KLA commander, who fought forces loyal to then Serbian strongman Slobodan Milosevic, had been tried for war crimes before the local judiciary.

The war, which claimed around 13,000 lives, ended when a NATO-led air campaign halted Milosevic's crackdown on the pro-independence Kosovo Albanians and ousted his forces from the territory in June 1999.