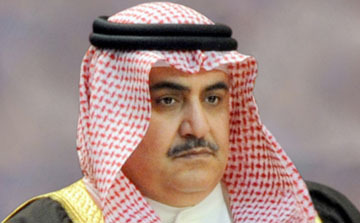 Bahrain's foreign minister on Tuesday lashed out at Hizbullah leader Sayyed Hassan Nasrallah, calling him a "criminal" with no right to criticize the kingdom over its treatment of its Shiite opposition.

"The people of Bahrain are above being addressed by a criminal whose hands are stained by the blood of innocents in Syria, Lebanon and Iraq," Bahraini Foreign Minister Khalid al-Khalifa wrote on Twitter.

"Any contact with terrorist Hizbullah is a contact with the enemy," said Khalifa, whose Sunni-ruled kingdom, along with other Gulf monarchies, views Hizbullah as a terror group.

Nasrallah on Monday dismissed the government of Bahrain as "dwarves whose oppression will get them only disappointment," warning that the Bahrain government "should not assume it can continue to oppress its people and pressure the outside world to remain silent."

Nasrallah insisted that his party does not meddle in Bahraini affairs to back the country's Shiite majority, saying that Bahrain's Shiite opposition "does not belong to any (foreign) state or side."

"What is happening in Bahrain is very dangerous," said Nasrallah, pointing to the justice ministry's decision to seek a judicial order to shut down a Shiite clerics' group, and to the latest arrest of a top figure in the main opposition association Al-Wefaq.

The sharp riposte to remarks made by Nasrallah comes amid a ratcheting up of sectarian tensions across the region as Sunni and Shiite Muslims back opposing sides in Syria's civil war.

Gulf monarchies, which are supporting the Sunni-led rebellion against the Syrian government, have been infuriated by Hizbullah's open intervention to keep Syria's President Bashar Assad in power.

They have collectively agreed to impose sanctions on Hizbullah supporters.

Dwarf.... Dwarf.... Dwarf....!!!! How tall are you...? 155 cm? How dare you refer to Sayyed Al Moqawaleh as "criminal". The Islamic Secular Shia Only Resistance supports the oppressed peaceful Bahraini Shia just as much as it supports all oppressed people throughout the world; In Bosnia, Myanmar; Syria, and Iraq. How dare you Khalifa ibn Khalifa accuse Sayyed of being sectarian and getting involved in Bahrain internal affairs. Your tyrannical rule and oppression of the Ghandi style peaceful Shia only Bahraini revolution will fail just as your Saudi brethren support of takfiris in Syria has failed. The Saudi Monarchy is crumbling already and sending secret envoys asking Sayyed for forgiveness. You days in power are numbered. Mark my words.....

Well said ! Thank you so much Mr minister!

How can he get away with this comment nahar net? And if I mention Sunnis I will be deleted

keep censoring me naharnet, it wont change the fact that this "royal" family is done with.

It boggles the mind how Sunni politicians everywhere: M14, Saudi, Qatar can bomb and kill Shiaa and call them names while if a frustrated Shiaa person says something he will be crminalized by the above SOB and their naharnet mouth piece

name one shia person assassinated by sunnis or Christians ... just ONE and I will be happy. for every name u have, I will give u 10 sunni/Christian names bombed by Shiites

Oh but we knew that already. And filthy.

Sure. Maybe. After Assad is judged.

A criminal is a terrorist like al Khalifa who slaughters peaceful, pro-democracy protesters using foreign, Pakistanti mercanaries as a bid to retain power at all costs.

please remind us how many peaceful civilians assad killed and how many in bahrein?

don't bother--they are known as hypocrites and really don't have any answers because they are taught to not question authority (at least their own).

ya zaki ya habibi ma the rebels in Syria... who is funding them? Mish Bahrain, Qatar, Saudi? It's one and the same conflict, and the oiley sheikhs are pushing it and you are their pawn. Congratulations.

@gabby
I must correct you. HA is slaughtering the Al-Qeada rats in Syria. The rats that have flocked from all over the world to fight Jihad in Syria. These rats look at Shia as there enemy. And with all the funding from your bosses in Saudi they still have made no progress in overthrowing Assad.
And do you think you can provide one piece of evidence that HA has agents in Bahrin "to make trouble" as you put it.

so let me get this straight.. fighting crazy wahhabis who want to set up an Sunni Islamic state in the whole region is now hypocritical? Lol........ wlak ayya rights of the Syrian people??? Those were thrown by the wayside once the US, Israel, and the oily sheikhs from the Gulf started sending their mercenaries. Wake up.

Shukran Bahrain for reminding us of what we already knew about Hezbollah the international terrorist organization!

I dont get it M14ers. Do you think its ok for this child-molesting dictator to kill and imprison his people just because they belong to a certain sect?????
You guys are the definition of hypocrites. And if theres one thing that God hates most, its hypocrites.

Is there any dirty Jihadis coming from all over the world to fight in Bahrain?? NO
Is there any armed opposition against the dirty Bahrain regime???? NOO
Do you hear one mention of the legitimate Bahrain uprising on tv???? NOO

Thank you to the nobody Israeli FM of Bahrain with a filthy history and a filthier future.

banikharoof: "Ever heard of hezbullah selling the captagon pills in gulf?"
nope, and god knows i heard it all about hezbollah, the serious and the ridiculous, the facts and the imaginary accusations, the hate and the love. but that i never heard.
how about you give me a source that confirms that?

man you speak like a child, the "aya-devil" !? really? hahahahaha
anyway, think what you want, and please remain a sectarian hater, that excuse you found is great. but dont come whining when this blows back in your face. mark my words.

What do the leadership of mustahbal, fath el islam, qatar, the taliban, al qeada, bahrein, nusra, saudi have in common? Oh silly you indeed.