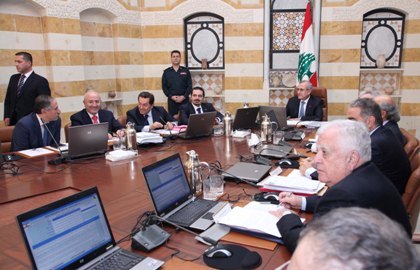 A consensus on postponing the thorny issue of "false witnesses" until after the Eid al-Adha holiday was reached during Wednesday's cabinet session, "after each side stated its point of view," Information Minister Tareq Mitri said after the session.

Mitri quoted President Michel Suleiman as saying that "there is no use of putting the issue -- of referring the false witnesses issue to the Judicial Council -- to the vote of the cabinet."

Media reports said that the president commenced the session by stressing the need to postpone the "false witnesses" issue until after Eid al-Adha, the thing that was met by the rejection of the Opposition ministers. Suleiman then suggested forming a parliamentary inquiry committee tasked with resolving the issue.

For his part, Prime Minister Saad Hariri reportedly voiced his rejection of putting the issue to the vote of the cabinet, saying that "the issue must be solved politically, not through a cabinet vote."

On the other hand, Hizbullah's mouthpiece Al-Manar TV reported that Hariri told the Opposition the following: "The false witnesses issue must be resolved politically, and in case you want to vote, there are many dangerous issues -- which had also ruined the relation with Syria -- that need to be put to a vote."

For its part, OTV reported that Hariri stipulated putting all matters related to the Special Tribunal for Lebanon to the vote of the cabinet, "in the face of Opposition's insistence on the false witnesses issue."

On the other hand, Al-Jadeed television said that a verbal clash erupted between State Minister Jean Oghassabian and Agriculture Minister Hussein Hajj Hasan regarding the jurisdiction of the Judicial Council and the ordinary courts.

Al-Jadeed quoted Hajj Hasan as saying that "what is being plotted for the country is more dangerous than what Lebanon had gone through during the past five years."

Nearly all media reports said that the session was held amid regional contacts aimed at avoiding the collapse of the national unity government.

President Suleiman has ruled out a vote on the controversial "false witnesses" issue.

"We will not run away from this issue, but we are determined not to resort to voting," Suleiman said in an interview published Wednesday by Ad-Diyar newspaper.

He said he has held "intensive contacts" with the various political sides to avoid a heated Cabinet session.

"No escalation" in Cabinet, Suleiman stressed.

The President said he believed Wednesday's Cabinet meeting will be quiet and will not "explode."

He said Prime Minister Hariri was also in favor of a quiet session.

Suleiman said "no definitive solutions" have yet been reached on the false witnesses issue, stressing that contacts were ongoing.