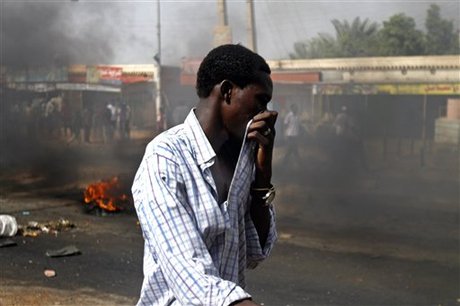 New protests broke out in Sudan on Thursday as medical officials said 29 people were killed in three days of rioting sparked by a government decision to scrap fuel subsidies.

As the protests escalated, the largest since President Omar al-Bashir seized power in 1989, the leader wanted for war crimes and genocide cancelled a planned trip to the U.N. General Assembly.

The latest protests began in the Inqaz district south of Khartoum where some 3,000 people marched on the main road and hurled stones at passing cars, witnesses said.

Police responded with tear gas and rubber bullets, the sources said, but no casualty figures were immediately available.

Earlier on Thursday, a hospital source in Khartoum's twin city of Omdurman told AFP that "we have received the bodies of 21 people" since the protests first broke out on Monday, adding that all were "civilians".

Another eight people were killed in other regions, witnesses and families said.

The new protests in the capital came after anti-riot forces deployed from the early morning at major road intersections, an Agence France Presse correspondent said.

There was rioting in several Khartoum districts on Wednesday, some near the city centre, and public transport ground to a halt.

The demonstrations continued late into Wednesday night and spread to new neighbourhoods.

"Freedom, freedom!" and "The people want the fall of the regime!" shouted protesters, many of them students, borrowing the refrain of the Arab Spring protests which toppled several governments in 2011.

"We came out, we came out against those who have stolen our sweat," they chanted, according to a video uploaded on YouTube.

Protesters tried to torch a tourism ministry building in southern Khartoum, witnesses said, adding that its exterior was scorched.

The protests first erupted in Wad Madani in Gezira state south of Khartoum, the scene of the first death on Monday. They have also spread to Nyala, the capital of South Darfur state.

Many students have been reported as taking part in the trouble, and the education authorities have announced the closure of schools until September 30.

Internet access remained cut on Thursday, users said, but it was still not known if this was a technical failure or a deliberate move by the authorities.

The American embassy urged its citizens to avoid flashpoint areas, saying it had received "regrettable" reports of casualties and warning of further protests.

Inflation is already running at 40 percent.

Bashir said on Sunday fuel subsidies had reached "a level that is dangerous for the economy".

Khartoum lost billions of dollars in oil receipts when South Sudan gained independence two years ago, taking with it about 75 percent of the formerly united country's crude production.

Since then Sudan has been plagued by a weakened currency and a severe shortage of dollars to pay for imports.

Bashir, meanwhile, had been scheduled to travel to New York to address world leaders at the U.N. General Assembly on Thursday.

But a U.N. spokesman told AFP said that his foreign minister, Ali Karti, would address the world body on Friday instead.

Under international accords, the United States would not have been able to refuse Bashir a visa. But it could have detained him on arrival.

U.S. authorities had refused to say whether they had granted Bashir a visa.

The International Criminal Court had urged the United States to arrest Bashir who is wanted by the court at The Hague court on 10 counts of war crimes, crimes against humanity and genocide in the Darfur conflict.

The ICC issued arrest warrants for the Sudanese leader in March 2009 and July 2010. He has traveled to several African countries since then, however.