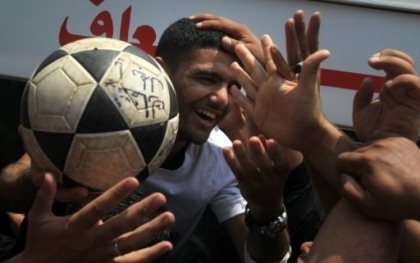 Mahmoud Sarsak, a Palestinian footballer who staged a hunger strike of nearly three months while in an Israeli jail, was freed on Tuesday and returned to the Gaza Strip.

An AFP journalist saw the 25-year-old enter the Palestinian territory in a Red Cross ambulance to be greeted by hundreds of people, including relatives, who waved Palestinian flags and pictures of other prisoners.

Tens of them surrounded the ambulance chanting "Victory, victory!" and "Freedom for the prisoners!"

"I cannot describe my joy," Sarsak told journalists in Beit Hanun. "But at the same time I cannot forget the cries of the prisoners who are still in Israeli prisons."

"This is a victory for the prisoners and I thank all the Palestinian, Arab and international bodies and people who stood up for me," he said.

His mother told AFP she was proud of her son's "victory in the empty-stomach battle."

"I am proud Mahmoud won over the Israeli prison guards and hope all prisoners will be released," she said.

Sarsak was taken to Gaza City's Shifa hospital, which said he was weak but in good condition. He then returned to his home in Rafah in the southern Gaza Strip, for a celebration in his honor.

Sarsak went on hunger strike for nearly three months in protest against his detention without charge under Israel's "unlawful combatants" law, which is the equivalent of administrative detention but for people who are not West Bank residents.

His detention order was due to expire or be renewed on August 22.

But on June 18, his lawyer announced that he had reached an agreement with Israel's prison services to end his hunger strike in exchange for his release on July 10.

Sarsak was arrested in July 2009 while on his way from Gaza to sign on with a West Bank football team.

Following Sarsak's release, Amnesty International expressed "relief," while calling on Israel to "immediately end the use of administrative detention, and release all Palestinians held under any legal provisions allowing its use, or charge and try them fairly in a court of law consistent with international standards."

Israeli officials had called Sarsak an "Islamic Jihad terrorist who planned attacks and bombings," but never made public any charges or evidence against him.

He began his hunger strike on March 23, but briefly paused it in mid-April.

He received vitamins, sugar and milk for much of the protest, but doctors who visited him expressed concern about his health.