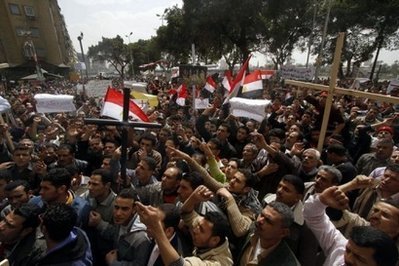 The spiritual leader of the Orthodox Church called Sunday for an end to the persecution of Christians, especially in the Middle East.

"Have we not been persecuted these days, our Christians in Syria, Egypt... and the Middle East, just for spreading God's words?" asked Ecumenical Patriarch Bartholomew.

Thousands of people, along with the leaders of seven Orthodox churches, high-ranking clergy and Serbian state officials, attended the ceremony.

The edict, adopted in 313, was agreed between Constantine I, the emperor of the western part of the Roman empire, and his rival Licinius, ruler of the eastern part, proclaiming to treat Christians with benevolence.

The ceremony was held in Nis, 240 kilometers (145 miles) south of Belgrade, where Constantine I was born in 272.

Most of Serbia's population of 7.2 million are Orthodox Christians. Since the fall of communism in the early 1990s, the Orthodox Church has increased its influence in the Balkan country.

Representatives of the Catholic Church and the Islamic community, as well as other religious confessions, were in attendance.

Although the two main Christian churches have made attempts towards overcoming centuries-old divisions, Roman Catholic Pope Francis did not attend.

Patriarch Bartholomew and Russian Patriarch Kiril, Theopholis of Jerusalem and their counterparts from Serbia, the Czech Republic, Albania, Cyprus and Poland, held a joint liturgy to mark the end of nine months of observations.

They called for the unity of Orthodox churches and closer ties with other churches and religious communities.

"The spirit of religious tolerance should prevail everywhere," Irinej said.