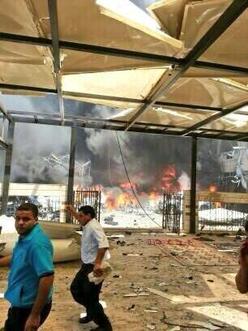 State Commissioner to the Military Court Judge Saqr Saqr ordered on Saturday the arrest of several suspects over their alleged involvement in the bombings in the northern city of Tripoli in August.

The NNA added: “He also demanded the detainment of other suspects, all of whom are Lebanese.”

Saqr also paid a visit to the Internal Security Forces' Intelligence Bureau to follow-up on the ongoing investigation in this case, according to the NNA.

The same source noted that the probe is being conducted under the supervision of Saqr and acting state prosecutor Judge Samir Hammoud.

Information obtained by LBCI television revealed that Youssef Diab was the person who drove the booby-trapped car and parked it in front of al-Salam mosque in Tripoli while Ahmed Merhi, another suspect in this case, parked the car in front of the Taqwa mosque.

On Friday, armed clashes broke out in Tripoli's areas of Bab al-Tabbaneh, Jabal Mohsen and Syria Street over Diab's arrest, wounding an army soldier and a young man identified as S.M.

Quoting the Arab Democratic Party, the main political and armed group in Jabal Mohsen, LBCI television said "the unrest erupted after an Intelligence Bureau unit arrested Diab, which prompted residents to protest and fire shots in the air, the thing that provoked Bab al-Tabbaneh's residents and led to clashes."

LBCI quoted the party's leader Rifaat Eid as saying that “the arrest of the young man in Jabal Mohsen is an attempt to eliminate the Alawite sect and it will not go unnoticed and we demand that the detainee be handed over to the army.”

Forty-five people were killed and over 800 wounded in a twin explosions in Tripoli on August 23.

The blasts targeted the Taqwa and al-Salam mosques as worshipers were performing weekly prayers.

Saqr charged on August 30 three suspects in the twin bombings of Tripoli in addition to a Syrian army Captain and another Syrian man over the booby-trapped cars.

Head of the pro-Syria Islamic Tawhid Movement-Command Council Sheikh Hashem Minkara, Sheikh Ahmed al-Gharib and informer Mustafa Houri were charged with the formation of an armed gang and undermining the authority of the state.

They were also accused of forming a terrorist network and planting explosives and booby-trapped cars.

I think the army is accused of turning a blind eye to HA violations (not the IBU unit of the ISF). I think this is why this Eid guy is demanding that the arrested Dib (sorry Diab) be handed over to the army. HA influence will then free him once he is in the army's hand.

if they're behind it then i'm glad they got caught.

well everyone can be sure of one thing:

none of the usual suspects will be on this article for any comment..

Both Nassrallah and mowaten are in constant contact withe the Ayatollah... so anything they say Must be True.