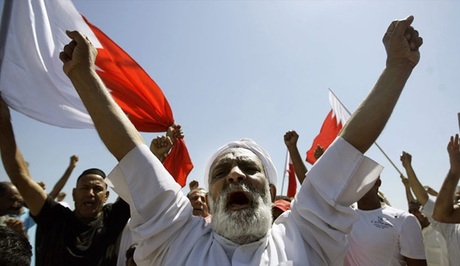 Anti-riot police in Bahrain used buckshot, sound grenades and tear gas on Saturday to disperse hundreds of Shiite protesters trying to march on an iconic square in Manama, witnesses said.

The demonstrators were trying to reach Pearl Square, the focus of Shiite-led protests in 2011, after the funeral of a Shiite detainee who died in hospital in the capital on Friday.

The witnesses said several protesters were injured when the security forces intervened, although they were unable to give a specific number.

Demonstrators chanted slogans against the authorities in the Sunni-ruled kingdom, which has a Shiite majority.

Pearl Square was the epicenter of the 2011 Arab-Spring-inspired protests against the ruling Al-Khalifa dynasty.

Bahraini Shiites continue to demonstrate in villages outside the capital and frequently clash with police.

These include a minimum 10-year jail term for an attempted bombing. If such attacks cause casualties, the sentence can be life imprisonment or the death penalty.

At least 89 people have been killed since the protests began two-and-a-half years ago, according to the International Federation for Human Rights.

Strategically located across the Gulf from Shiite Iran, Bahrain is home to the U.S. Navy's Fifth Fleet and is an offshore financial and services center for its oil-rich Arab neighbors.

God Bless the oppressed and poor Shia Bahrainis in their quest to achieve real democracy similar to the democracy their brethren in the Islamic Secular Shia Only Resistance in Lebanon have achieved. Down with the tyrannical Sunni Leaders of Bahrain. God Bless Sayyed Hassanallah for supporting the oppressed wherever they happen to be. Karbalaaaaaaaaaaaa