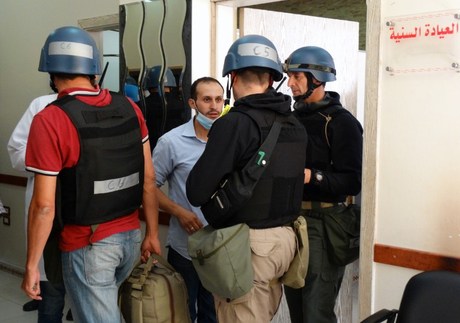 The world's chemical weapons watchdog said Wednesday its inspectors have checked 11 out of 20 sites identified by Damascus as it works to eliminate Syria's banned weapons.

"The OPCW mission has now conducted verification activities at a total of 11 sites that are identified by Syria's disclosure," the Hague-based Organisation for the Prohibition of Chemical Weapons said.

The OPCW has said that there are a total of 20 sites to be visited in Syria.

Since inspectors arrived in the country two weeks ago, activities have also included "critical equipment destruction at six sites as well as some Category 3 weapons destruction", the organisation added in a statement.

The chemical watchdog, which last week was awarded the Nobel Peace Prize, classifies Category 3 as "unfilled munitions and devices and other equipment specifically designed to aid the deployment of chemical weapons".

The OPCW and the United Nations now have about 60 experts working in Syria to eradicate chemical weapons, around a month after the OPCW accepted President Bashar Assad's application to join the Chemical Weapons Convention, in a bid to stave off a possible Western military strike.

The key convention came into force on Monday.

So far Syria has won rare praise for its cooperation with the inspectors, but the U.N. has stressed that key deadlines in the destruction of the war-ravaged country's chemical weapons should be met.

Inspectors have until June 30, 2014 to complete the destruction of Syria's chemical arsenal.

Meanwhile in Syria, cooperation between U.N. and OPCW experts has been "excellent and the morale of the joint mission teams remains high," the OPCW said.

The United States threatened a military strike after an August 21 chemical weapons attack near Damascus in which hundreds died.

Under a disarmament plan that has been given added force by a U.N. Security Council resolution, Damascus now has until mid-next year to get rid of its reported stocks of sarin, mustard and VX gas.

Syria must give the OPCW a plan for destroying its estimated stockpile of 1,000 tonnes of chemicals by October 27 -- one month after the Security Council Resolution.

By November 15, the OPCW will have set out a detailed plan with a timetable for the destruction of actual chemicals.

Russia and the Unites States, which drew up the disarmament plan, are still working with the OPCW on how to destroy the chemicals, diplomats said at the U.N. on Monday.

Russia has proposed building at least one furnace in Syria to burn it, they said.

However, OPCW and U.N. experts have doubts whether a furnace can be installed while the conflict, which has left more than 100,000 dead, rages on.