Three Suspects in Kidnap of Turkish Pilots Freed on Bail 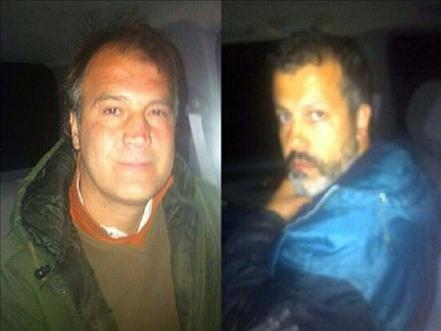 "We are innocent and everything will be clarified later," one of the suspects told reporters as the three left the Roumieh prison.

The two Turkish Airlines pilots – Murat Akpinar and Murat Agca – were freed Saturday as part of a swap deal involving the release of the nine pilgrims and a number of Syrian women prisoners.

A Qatari plane carried the two men home after a Lebanese military helicopter flew them from the Riyaq airport in the Bekaa to Beirut's airport following their release by their abductors.

Eleven Lebanese pilgrims were kidnapped in Syria's Aleppo region in May 2012 as they were making their way back to Lebanon by land from pilgrimage in Iran. Two of them were released in late 2012 and the remaining nine on Saturday.

On August 9, gunmen abducted the two Turkish pilots after ambushing a bus carrying Turkish Airlines crew from Rafik Hariri International Airport to a hotel in Beirut.

The families of the Lebanese abductees had accused Turkey of being behind the kidnapping of their loved ones. They, however, were quick to deny any involvement in the abduction of the Turkish pilots.

A previously unknown group calling itself Zuwwar Imam al-Rida claimed the abduction, and demanded that Turkey use its influence with Syrian rebels it backs to secure the release of the nine pilgrims.

On August 11, Mohammed Saleh was arrested by the Internal Security Forces Intelligence Bureau on charges of having links to the kidnappers of two Turkish pilots.

Saleh's family insisted that he only received messages of “congratulations” on his telephone when news of the abduction broke out and that he was innocent.

Surprise!!!!! Anyone who actually thought they would be out on trial, thumb me down. Lol.

this will further radicalize the victims (i.e those who aren't on an iranian/syrian payroll).... in this case people aspiring to live in an a free and independent lebanon.

This is a most official invite to date to act like them. it's dramatic!

Why are u all getting so fuzzy, assad did killed hundreeds of syrian with chemical weapon and when he handed the chemical weapon he was left alone (to use airforce, scuds...)
That how justice seems to work in our part of the world....

you Know imagine_1979...
I was just about to say the same exact thing!

imagine: how do you know it was assad who used chemical weapons?

because you keep denying it! LOL

Yes the rebel killed them selves like every march 14 martyr killed themselve to get some security council resolution... Come on man be a litle realistic...

oh so you think the rebels cannot kill syrians? after all the videos of them cutting throats and firing rockets with 0 aim on syrian residential areas? that's endearing.

imagine: it would be like if hezbollah bombs dahiye to accuse the israelis, come on!

And by the way a big thanks to general mamlouk for his help in this case (in fact anyone who helped is welcomed those are lebanese civilians) but if he may not send bombs to lebanon anymore it would be nice to.. I hope that general ibrahim asked him to go easy on the bombing in lebanon it would be of great help....

Bless You and a Million Bless You(s) to judge Ziad Makna for releasing these innocent Shia young men whose only fault was they happened to be relatives of our abducted pilgrims. The Lebanese justice system has earned my and the Lebanese people's respect and admiration by correcting a horrible mistake. It is now clear Qatar kidnapped the Turkish pilots and the truth can be hidden only for so long. God Bless the Islamic Secular Resistance and General Abbas Ibrahim for ending this terrible ordeal and returning these wrongfully accused young Shia safely to their families and loved ones away from those takfiri Islamists in Roumieh jail.

now is the right time for our youth to take the streets and topple these corrupt judges, army personnels, politicians, and of course armed militiamen.

It would too dangerous bro, imagine some guys passing by there see them and decides all by themselves to dress in black put some yellow rubans and shoot some of those... Like what happened in front of our army and security forces in front of the iranian embassi....

Thumb up anyway 4 ur daily contributions.

Its always the case... and when the M8 thugs of Hizbshytan started to control all departments in the country including the the Judiciary even Israeli spies were released...
I know, under the orders to Hizbsytan received from Telaviv and verified by Tahran .... WHY did you guys release them????
The Hostilities between the Iranian and the Zionist is nothing short of a movie ACT.

just noting however that none of you reacted so vigorously when the people who butchered lebanese soldiers in arsal were released on bail. weird, you'd think that murder is worse than abduction, but not for m14ers it seems.

hahah, m14ers being m14ers, ie: za3ran who use foul talks because they have no arguments.

¿U think u r funny douchebag?

no, i think YOU are :) inverted question marks and cheap insults, boy that makes you so unique and special.

What is left of this republic, it's judiciary, it's laws, it's institutions? I have always argued against partition, but now I am all for it. We might as well start hijacking plans, and attacking ships in the Mediterranean, I'm sure we can outdo the Somalis. While we're at it we might also forfeit paying back our loans. And to top it off, put some cream on the cake by going all the way and elect Aoun as president and Nesrallah as Lebanons Supreme spiritual guide and outdo the Iranians. Wouldn't that be dandy! Co-existence my bloody foot.

lol what a sudden change of heart! maybe i should also follow your example!

I'm still against partition but i can understand ur thinking, while there is life there still be hope....

What can one say??? Shame on a country some of its citizens are above the law.

I am surprised Michel Samaha is still in jail. Someone could kill me and the police could know the killer and do nothing about it.

oh really anonyme? you're usually not as biased, what about Sheikh Abdul-Razzaq al-Asmar? what about those who butchered soldiers in arsal? what about the guy in tripoli gunned down because he was an HA supporter? is any of those in jail?

of all those i mentioned here, only those who butchered soldiers in arsal were arrested, and released very soon after under a ridiculous bail amount.

as for you accusations against HA, they are mere propaganda, never backed by any facts. you guys keep accusing HA, even when salam gets a stomach virus, banikharoof says HA poisoned him. it's so ridiculous it can't be taken seriously anymore.

"they will soon be" > you dont know that. i dont believe in "ifs" and birds on the tree.

well in the case of samer hanna the shooter was handed to justice and judged, mind you.

and regarding the weapons, as far as we know HA fighters can travel empty handed and get all the weapons they want when they arrive (syria is where they got their weapons from in the first place, isnt it?).
but even if they traveled with weapons (also possible) it's still very different, because they are going there with the agreement of syrian officials.
whereas when you send fighters to a country against that country's will, it's an act of war, and therefore lebanon is responsible to at least try to stop them.

man anonyme that is what bothers me with you guys. we can disagree on interpretations, but you cant play around with facts like that!

Mustapha Hassan Moukaddem (the shooter in Samer Hanna case) was handed to justice. the military court in charge of the case examined it and said the killing was unintentional, then releasing him

Good bye--these guys will NEVER show up for trial

waiting for the cries of zionist conspiracies..

At least in Zionland/Israel people get fair trials. The Lebanese scum get rewarded 4 abducting/killing people.

hahahah showing your true colors, finally. you sectarian israeli scum, please go comment on your own sites, haaretz and jpost...

Southern pro Iranian/Syrian. I love thousands of miles away... And I've never voted in Lebanon. If any1 is guilty of supporting terrorists and foreign powers is U.

anonyme this is BS. many israeli prisons are off-limits for red cross and other orgs.

much more than that. why do you feel obliged to glorify israeli prisons when you actually dont know the first thing about it?
syrian prisons are hardcore, no denying that, but israeli ones are no better.

If I want 2 be able 2 walk freely in lebanon without having Hizballa teen terrorists checking my car, then I'm happy 2 be labelled as such. And I will seek friendship with ANYONE sharing the same goal regardless of his geographical location.

Legitimate.... Well that's to be proven... For some lebanese nationsl resistance was legitimate, others lebanese front "jabha al loubnaniyeh" was legitimate for other south lebanon army was legitimate and for most syrian army presence was legitimate... Here u hv at least half of the population that put in doubt hezbollah arms, more if u count FPM christians that support hezbollah because it is within aoun interest but deep inside conssider both shia and sunna as the other "al gharib...you know al gharib?..."
Please stop actung like hezbollah was some angel... Leave some space for reconciliation... U will need ur fellow lebanese someday, like u did a lot before...

How is it a 'legitimate resistance'? The definition of terrorism is "the use of violence and threats to intimidate or coerce, especially for political purposes" and they meet this definition PERFECTLY. Without weapons, what 'political' power do you think they would wield? Given what they are demanding these days, ZERO.

There was men from all confesions and multiple ideologies who fought in the south during occupation, most werenot hezbollah, the vast majority fought and spme fied for a better lebanon... I don't really thing that lebanon, i don't really think for a coutry hidjacked by dome religious party (this time it's a shiite one but all fanatics looks alike, sometimes they just dress better....
Even thoses were not considered legitimate by a part of thepopulation including hezbollah who fought tham and assassinated of they leaders, even those....
So please southern get real....

We R not accepting anything, it's imposed onto us by the mafia.... Aoun/nusralla/Charbel/Fneish/Bassil/Berri and so on....

yay that's a lot of style!