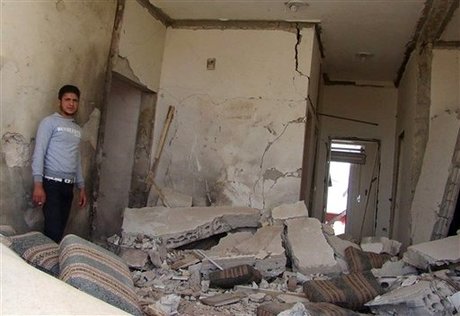 A mortar round hit near the ancient citadel in the heart of the Syrian capital on Sunday, while fierce clashes raged in several Damascus neighborhoods, a monitoring group said.

"A mortar landed near the Damascus citadel wounding several people, while another fell near the Dweila district (in the southeast), setting fire to a textile plant," said the Syrian Observatory for Human Rights.

State news agency SANA confirmed the reports, blaming "terrorists" for a shell that "caused a textile factory to burn down completely."

Fighting raged in Barzeh in the north of Damascus, according to the Observatory, which relies on a network of activists, lawyers and doctors for its reports.

In southern Damascus, fighting pitted rebels against troops backed by Hizbullah fighters and pro-regime militiamen in Al-Hajar Al-Aswad, according to the Syrian Revolution General Commission, a network of activists on the ground.

The fighting comes amid a massive escalation by the army aimed at taking back rebel areas in southern Damascus, which have been under siege by the army for nearly a year and where food is so scarce that many children are suffering from malnutrition.

Clashes were also under way in Sbeineh south of Damascus, while "regime forces bombarded parts of the town," said the Britain-based Observatory.

Elsewhere, Kurdish fighters pressed an advance against al-Qaida-linked jihadists in northern Syria, taking over the village of Assadiyeh and the Bir Nuh area of the majority Kurdish province of Hasake, said the Observatory.

The advance comes less than a week after Kurdish fighters seized the Yaarubiyeh crossing on the border with Iraq from jihadists.

Syria's civil war, which has killed more than 120,000 people and forced millions more to flee their homes, erupted after a regime crackdown on pro-democracy protests.